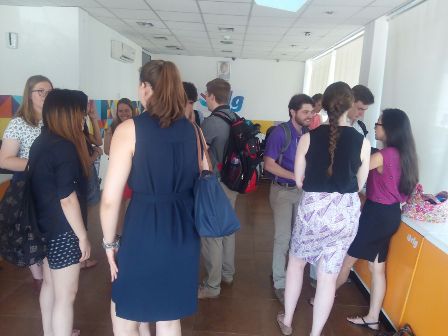 The team who were on their annual Tech Trek technological trip to Africa were at the Rlg facility and showroom where they experienced the company’s products.

The team of students also took the opportunity to purchase some Rlg products.

As part of the Teck Trek tour, the students also visited the Plant where they were taken through various stages in the mobile phone and computer manufacturing and assembling process by the Plant Manager, Fred Dornu.

The Head of Innovations at Rlg, Worlali Ameevor said to catch up with the speedy transformation in the device world, the company has commenced a process to re-tool all its facilities while it increases investments into research and development.

On his part, Sales Head of Rlg, Kant Aboagye told the delegation the company was capitalizing on the growth and presence of e-commerce to turn around its markets in various parts of the African continent, whilst the Corporate Affairs Manager of the company, Emmanuel Arthur commented on some operational challenges notwithstanding, the company’s dream of becoming a global competitor in ICT still on course.