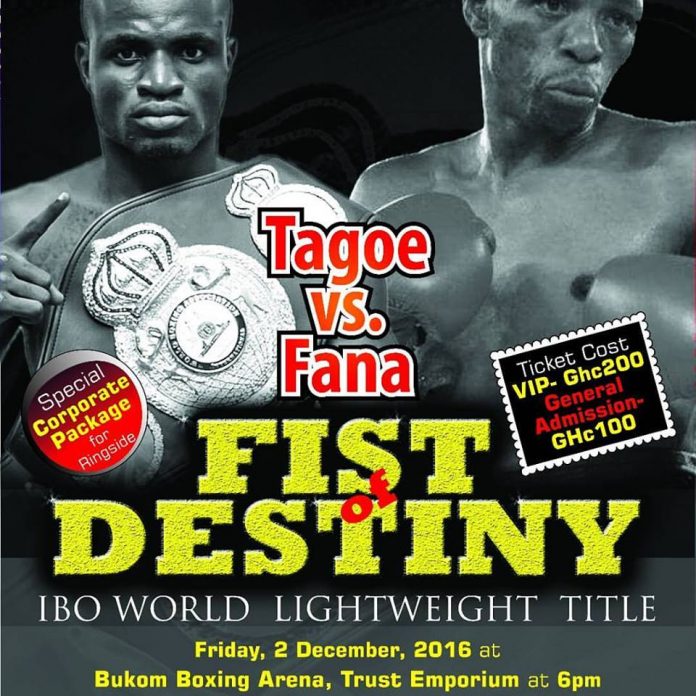 Ghana’s Emmanuel Tagoe will fight a different opponent for his world title bout at the Trust Sports Emporium after experienced Argentine opponent, Fernando David Saucedo “pulled” out.
Saucedo’s camp failed to travel to Ghana on Saturday citing reasons of their boxer’s ill health.
BabyJet Promotions who are promoting the bout have moved quickly to save the situation as they have arranged an opponent, Fana Mzonke for Emmanuel Tagoe.

South African boxer, Fana Mzonke has agreed personal terms and will travel to Ghana on Tuesday for the bout at the Bukom boxing arena in Accra on Friday, 2, 2016.

“We had to get a new opponent for Tagoe following Saucedo’s unwillingness to travel down for the bout, luckily for us we got the IBO to approve for a replacement after this disappointment from Team Saucedo,” said promoter Samuel Anim

“This goes down to show what we have always been saying that opponents are afraid of Game Boy.
“We need Ghanaians to rally behind us to make it happen and for Game Boy to win the World title for Ghana”

Emmanuel Tagoe will battle South African Fana Mzonke for the IBF Junior Lightweight Champion.
But reliable information reaching Yours Truly indicate the Argentine just chickened out following his anticipation of losing the bout
Mzonke Fana is also known as The Rose of Khayelitsha he has fought 38 times, losing 10 of them 2. Born on 1973-10-29 (Age:43) His Birthplace is Qumbu, Eastern Cape, South Africa His Hometown is Khayelitsha, Western Cape, South Africa. His Stance is Orthodox. His height is 5′ 7″ / 170cm. His reach is 70″ / 178cm. Hi trainers are Felix Venganayi (former), Vuyani Bungu

Denys Berinchyk Will Be Very Easy For Me – Game Boy Tagoe

Emmanuel Tagoe Ready To Take On Lomachenko or Teofimo