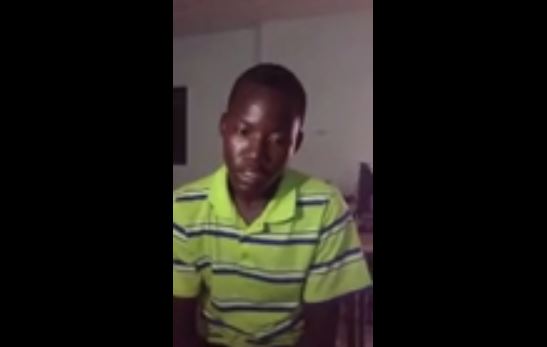 15 year old boy who claimed he had an affair with the wife of prophet Enoch Jenkins Now says it was a Fabricated Lie to the world. In a video released on social media at 00:00 am that featured a remorseful Jerimiah asking for forgiveness from the Prophet Enoch Jenkins, His wife, His family the entire world and God for the fabricated lies He told about the Wife of the prophet Enoch Jenkins that she had an affair with her.

In august 2013, Jerimiah granted an interview to the New crusading guide in Ghana which later appeared in an article on many online platforms with the headline ?Wife of free-lance pastor and Prophet Enoch Jenkins defiles a 14 year old boy?

Today, Jerimiah has shockingly revealed that, anything that He said about the wife of Prophet Enoch Jenkins having an affair with him was not true. According to Jerimiah, promises that were made to him by dubious people who planned and stage this blackmail on the ministry of Prophet Enoch Jenkins encouraged him to say more untrue stories about having an affair with the wife of the prophet. He also claimed that he felt he was going to be helped more by the people who made these empty promises to him.

He claimed that one Mr Paul promised to sponsor his education and send him abroad and take care of him. He also claimed that one Pastor Felix told him everything was going to go on well.? However now he has realised all of them used him to achieve their personal plot and agenda and now he feels abandoned, left alone, fooled and betrayed, because they have not fulfilled any of their empty promises.

He has therefore decided to tell the whole truth and let everything come out, all the truth. Everything that went wrong and everything that He said which was wrong, and fabricated lies were meant to dent the ministry of the world acclaimed Prophet Enoch Jenkins. He also went on to apologise to the public for lying is saying that Mrs. Jenkins had an affair with Him Jerimiah.

Jerimiah said he has repented from his sins and ?cautioned other children in Ghana not to lie about other people if some dubious people came to them with empty promises to entice them. He said they should be able to say the truth and believe that the truth can set a man free and even as he made these confession in the video He felt free in his heart and promised himself to become an ambassador of truth from now on.

Here is an expert of His confession tape.