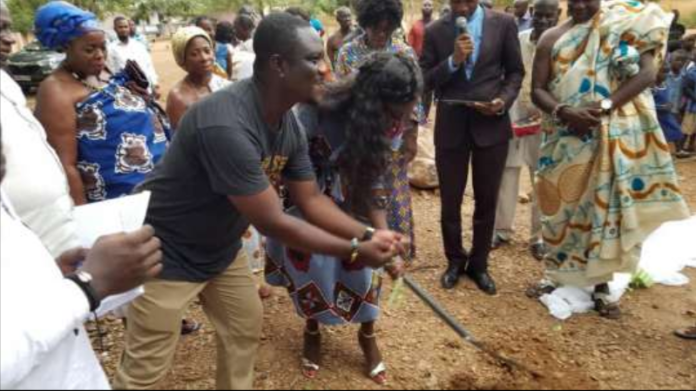 Bozoma Saint John, a renowned marketing executive and global ambassador for literacy centred non-profit organization -Pencils of Promise, Thursday cut sod for the commencement of work on a new kindergarten block for the Akwamufie Presbyterian Basic School in the Asuogyaman District of the Eastern Region.

The project, a three unit modern structure with an office and sanitary facilities, would be executed by Pencils of Promise to replace a long derelict semi pavilion that exposed pupils to harsh weather.

Bozoma, who is currently the chief marketing officer at US talent agency Endeavor, is in Ghana for the Independence Day celebrations, and joined Odeneho Kwafo Akoto III, Paramount Chief of Akwamu State, and the royal house of Akwamufie for the ceremony.

“I am very honoured to come here with the Pencils of Promise team to break ground on a new kindergarten school, and also to celebrate the education system of the children of Akwamufie, given that they are the future of this Region, and very much so the future of Ghana,” she said at a ceremony at Bogyawe palace to welcome her.

She was in the company of some colleagues and friends who were first time visitors to Africa, and included American footballer Malcom Jenkins, who is also a senior vice president of Pencils of Promise.

“I hope that the kids who are educated there would not just brighten this community, but would also brighten Ghana, and then Africa as a whole, and of course, the world as a higher result,” Bozoma said as she performed the sod cutting, with further promise to continuously support the enlightenment of the people.

The Brand Ambassador who once held a lead marketing role at ride hailing giant Uber, hinted of plans to start a music production in the country, and help develop the local entertainment business industry.

Odeneho Akoto celebrated her accomplishments, saying her presence in the traditional area would uplift the State of Akwamu.

Pencils of Promise is counted among the top non-profit organizations supporting education in the country, and the Paramount chief was pleased Bozoma’s touch would spur the NGO, and promote human development in the country beyond limits.

Mr Freeman Gobah, County Director of Pencils of Promise, said the new building would provide convenient rooms of good quality standard for the children, and gave the cost as US$50,000.

He said the NGO’s square focus on education won it the support of entities that believed in human progress, and would continue to help tighten the gaps in education development in Ghana.

The present kindergarten block was built in 1998, and at the moment not in good shape.

Children at Doggoh unable to attend school in rainy season

What a Child Needs to Know Before Kindergarten