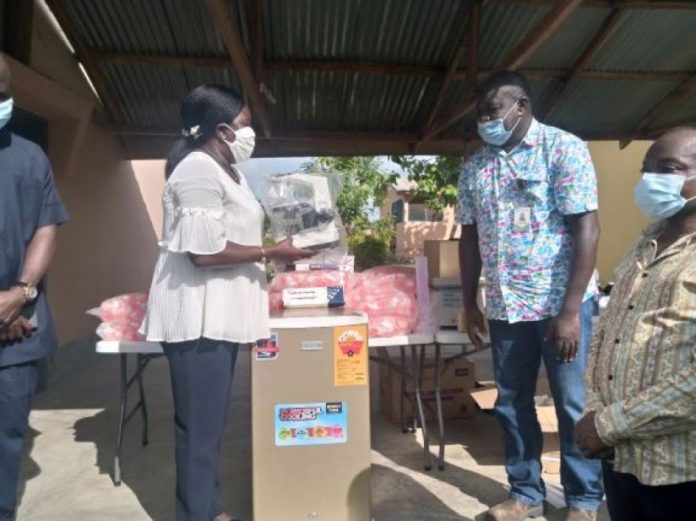 The Bui Power Authority, managers of the Bui Hydropower Dam on Monday presented laboratory equipment worth GHC15,000.00 to the Bongase Health Centre to improve on healthcare services delivery in the Dam’s catchment communities.

The equipment, comprising pregnancy and malaria test kits, microwave, refrigerator, thermometers and others would be used to stock a laboratory centre constructed by the people of Bongase to make it functional.

Speaking at a short ceremony at Bongase in the Banda District of the Bono Region, Mr. Salifu Wumbilla, the Director, General Services Department of the BPA, said improving the health and well-being of people around the dam site was a priority, saying the Bongase community requested for the equipment.

He explained that the BPA and the Banda District Health Directorate undertook health assessment impact, to identify the immediate health needs of the communities in 2015 and since then the Authority had been providing support to address the situation.

Mr. Wumbilla said Mr. Fred Oware, the Chief Executive Officer of the BPA, would inspect the health centre to ensure the facility had been furnished with required medical devices and equipment to position it well to provide quality healthcare services to the people.

He assured that the Authority was committed to helping improve on the socio-economic livelihoods of the people who were directly or indirectly affected by the 400 megawatts Dam.

Mr. Simons Adams, the Banda District Director of Health, thanked the BPA for its continuous support in making life better for the people, saying with the equipment, the Directorate would also ensure for a laboratory technician to be posted to serve the community as soon as possible.

Mr. Ahmed Ibrahim, the Member of Parliament (MP) for Banda Constituency, highlighted on the COVID-19 and advised the people to comply with the social and physical distancing protocols, to protect themselves and their immediate families.

The MP said he was working hard for the Health Centre to be upgraded to a Polyclinic, and appealed to the BPA to supply the facility with modern medical devices and equipment.

Mr. Joe Danquah, a former MP for the area and the Chief Executive Officer of the Middle Belt Development Authority, said because the community lacked public toilets, open defecation was becoming the normand the issue was worrying.

He was however confident that government would soon construct a public toilet and community centre for the people.