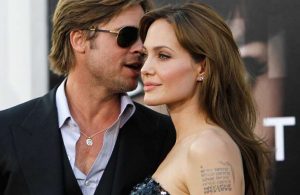 Brad Pitt and Angelina Jolie are reportedly back on speaking terms after their initially acrimonious split.

The pair have been embroiled in a bitter custody battle over their six children ever since announcing their decision in September 2016 to separate after 12 years together.

According to People magazine a source revealed that the estranged couple, who were earlier communicating through their lawyers, are now speaking directly to one another.

Following the split, the 53-year-old Troy star was investigated by child protection services following allegations of an altercation with his eldest son Maddox. While he was cleared of any wrongdoing, according to reports, the father-of-six was worried that Jolie could be cutting him out of their children’s lives.

As their public spat turned ugly, Pitt’s team called on the Los Angeles Superior Court judge to seal the records of their six children, Maddox, 15, Pax, 13, Zahara, 11, Shiloh, 10, and twins Knox and Vivienne, eight in a bid to protect their privacy during the ongoing legal dispute between their high-profile parents.

© Mario Anzuoni/Reuters Brad Pitt Angelina Jolie At the time, the Fight Club actor appealed to his wife to “lower the volume” on the public custody battle as he requested privacy for the couple’s six children. “What matters most now is the well-being of the six children,” he said in a statement, adding: “I kindly ask the press to give them the space they deserve during this challenging time.”

He is now said to be relieved that they are negotiating their custody issues with a judge in private. “He’s much happier,” a source said, according to Mail Online. “He’s very relieved that things are not playing out in public anymore.

“It was a rough time, but they were able to resolve it,” added the source. This is a work in progress … the goal was to resolve everything for the kids and the whole family, and they’re working toward that.”

The estranged couple had earlier agreed to a temporary custody agreement according to which, the Allied actor was required to visit his children in the presence of a therapist.

Last month Jolie described Pitt as a ‘wonderful’ father and according to Hollywood Life, the 41-year-old actress is also feeling reassured about the way the custody agreement in unfolding. A source said: “Despite everything, Angelina, too, is happy and relieved the family is healing after the rocky split”.