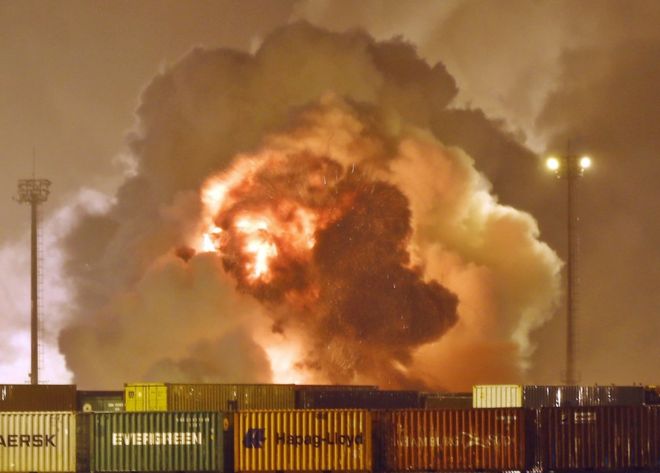 A chemical fire that started after an explosion at a cargo warehouse in Brazil has been put out after two days.

The fire in Santos spread toxic gas over the country’s biggest port and across four cities.

The company owners said the containers were full of acid and a disinfectant which came into contact with rainwater, causing a reaction.

Reports say close to 200 people in three cities were taken to hospital with breathing difficulties.

Prosecutors are now investigating whether anyone is to blame for the fire, that more than 300 firefighters battled at its peak.

The container terminal was operated by Localfrio, a logistics company, in Guaruja, an area on the eastern side of Santos, in Sao Paulo state.

A spokeswoman for the company, which exports chemicals used for refrigeration and general cargo, said the containers were filled with chloric acid and sodium dichloroisocyanurate – a cleaning and disinfectant agent.

Reports in Guaruja said 85 containers on the site were damaged.

Local mayor Mario Antonieta de Brito had asked people to stay out of the rain which could “contain chemical elements that can burn the skin”.

A general view over the port on a giant cloud of smoke billowing in Guaruja, near Santos, Sao Paulo, Brazil, 14 January 2016