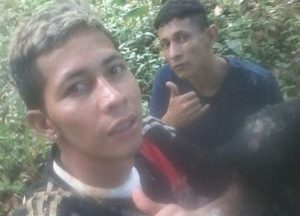 A Brazilian man who broke out of a prison in the northern city of Manaus has been posting photos of himself on Facebook, bragging of his escape.

In the picture, Brayan Bremer, who is serving a sentence for robbery, can be seen amidst dense vegetation giving the thumbs up.

Behind him is another fugitive who police say has since been captured.

The men are among dozens who escaped on Sunday from two prisons in Manaus.

Bremer was among 72 inmates to escape from Antonio Trindade jail on Sunday in the northern state of Amazonas.

Hours later another 112 prisoners broke out of the nearby Anisio Jobim jail amidst a deadly riot which left 56 people dead.

Bremer was active on Facebook during his time in jail, despite a ban on prisoners using the internet.

But it was his posts after his escape which went viral in Brazil.

The first post shows Bremer in a Bayern Munich football shirt covered in mud alongside a fellow fugitive with the message: “On the run from jail.”

Another showed Bremer with four others in a similar jungle location eating fruit.

While Bremer’s Facebook account has now been deleted, a number of spoof accounts in his name have since appeared, such as @fugitivodoano (@FugitiveOfTheYear).

They show Bremer and his fellow escapee as the heroes in a variety of films such as prison escape drama The Shawshank Redemption, TV series Prison Break, and The Cold Light of Day, the Portuguese title of which translates as Ruthless Escape.

While Facebook users appeared to be making light of the mass escape, police in Manaus continued their search for the fugitives.

Officials said they had recaptured 40 so far, among them the man who appears in the selfie with Bremer.