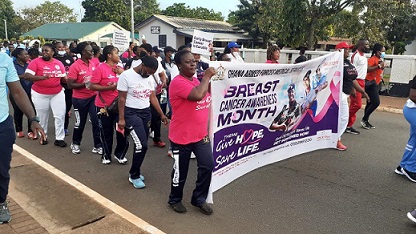 He advised the women to consult medical doctors if they noticed lump, swelling, redness and darkening, change in size, dimpling and nipple discharge in the breast because early detection of breast cancer was important in saving lives.

Dr Sanu gave the advice on Thursday during a lecture after a breast cancer awareness health walk by the Ghana Armed Forces (GAF) in Accra.

The walk, which took place within Burma Camp, brought together women, civilian employees, men and wives of Armed Forces personnel.

Dr Sanu said even though the cause for the disease was not known it was advisable for all, especially women, to avoid smoking, oral contraceptives and alcoholism, which were risk factors of breast cancer.

Breast cancer, he said, was the most frequent cancer among women, stressing that its prevalence was increasing, a cause for urgent action.

Dr Sanu said the disease was the leading cause of cancer death among women, adding that since 2008, there had been a 22 per cent increase in the incidence of breast cancer in the country.

Research revealed that a woman dies of breast cancer every minute, while an estimated 15.127 million years of healthy life are lost globally to breast cancer.

He advised women to engage in regular exercises to cure breast cancer and other diseases like hypertension and diabetes.

Vice Admiral Seth Amoama, the Chief of Defence Staff, GAF, said as part of the activities to raise awareness about breast cancer, the Forces would organise a health screening on Saturday, October 23 to Sunday 24, 2021 at the Burma Camp.