Jamaica may have another sprinting sensation on their hands, after a 12-year-old female athlete posted a record time at the 2017 Boys and Girls Championships over the weekend.

Brianna Lyston left her competitors in her wake to win the 200m race in the Caribbean nation, clocking a time of 23.72 seconds – almost within two seconds of the senior world record set by Florence Griffith-Joyner at the 1988 Olympics.

Lyston, who attends St Jago High School in Spanish Town, St Catherine, finished 0.88 seconds ahead of her nearest rival Oneika McAnnuff to win the 200m final, and she showed she’s not bad at shorter distances either. 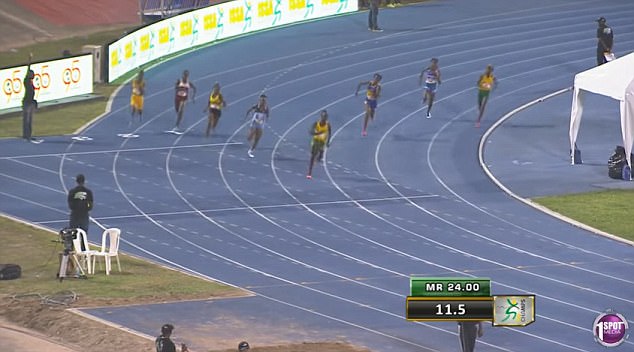 The budding speed merchant also won the 100m dash on Thursday night in her Under-13 age group at Class Four level, winning the final in 11.86 seconds.

It is little wonder she is being immediately compared to the exploits of her all-conquering compatriot Usain Bolt.

Despite Lyston’s tender age, her potential as an elite athlete has been known for some time, with her first coming into national prominence as a 10-year-old.

The short-distance runner posted 42.41 seconds in the 300m at the Caribbean Union Teachers Championships in Trinidad and Tobago in 2015 – over a second faster than the time clocked by the winner of the boys’ race.

The St Jago High School pupil is set for a big future in the sport after posting a stunning time.

Her sub-24 seconds sprint was an improvement on her semi-final time in Heat 2 of the preliminary round, but she had already beaten the previous record of 24.21 set in 2015 by Joanne Reid.

She has some way to go to match the feats of Bolt, but the eight-time Olympic gold medallist was far less advanced as a professional athlete at the same as Lyston.

As a 12-year-old, Bolt began to show his sprinting potential by becoming the fastest 100m runner at his school Waldensia Primary, but his love for all sports meant it was not until he was 14 that he focused on improving his athletic abilities.

It was fittingly at the same event Lyston has now caused ripples across the world that Bolt won his first annual high school championships medal in 2001, taking silver in the 200m with a time of 22.04 seconds. Lyston was certainly no slouch in the 100m dash either, winning the final in 11.86 seconds

Tropical Storm Elsa lashes Jamaica as it moves toward Cuba