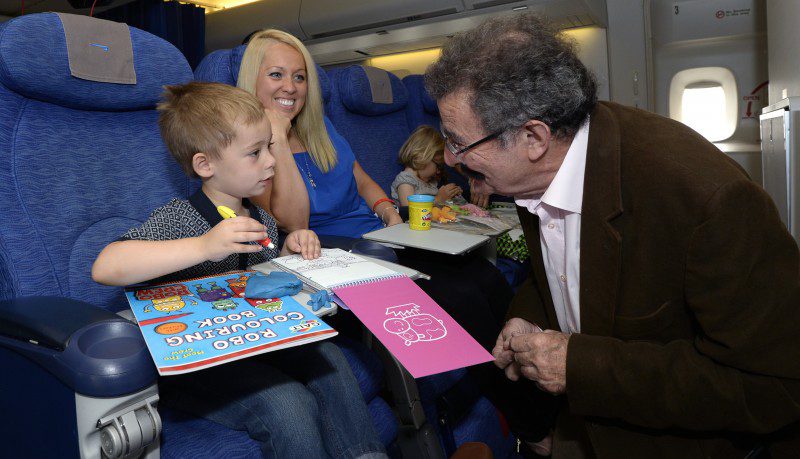 School?s out for most of the country this week and ahead of the great family getaway British Airways Holidays surveyed parents to understand their travel worries and discover the top toys to take on a plane.
British Airways found the biggest concern parents had when flying with their youngsters was keeping them entertained, with 60 per cent of parents revealing they were unable to keep their child occupied for longer than 30 minutes.

The airline conducted a social experiment, placing 30 youngsters on a flight for two hours with a selection of toys. The children, aged two to 10, were given 90 minutes playtime and observed by scientist and TV personality Robert Winston and a team of educational psychologists.

The surprising findings revealed that it was actually the cheapest toys that kept the children occupied for the longest. Play-Doh and toy-of-the-moment Loom Bands topped the list with 80 per cent of children and 70 per cent of parents saying theywould take these on a flight in the future. Both toys, costing just 74 pence and ?1.99 respectively*, kept more than half of the children occupied for longer than 40 minutes.

The most popular toy among two to five year olds was Play-Doh, while Loom Bands were a firm favourite with the five to 10 year olds. Timeless classics such as Lego and Top Trump cards also scored highly with this age group; keeping them entertainedfor an average of 37 and 33 minutes respectively.
Professor Winston, said: ?Although the temptation is for parents to play a film in the hope that their child falls asleep, activity based toys, such as Lego, sticker books and travel games are also a great way to keep them engaged. Bringing out adifferent toy at regular intervals is guaranteed to keep them quiet for longer than 90 minutes.?

In the poll of 2,000 people a quarter of those surveyed said they worried about their children disturbing other passengers, while more than half were nervous about disrupting their youngster?s sleeping pattern.

Dr Vivian Hill, educational psychologist from the Institute of Education, said: ?Toys that spark the imagination and encourage creativity, rather than static toys like soft toys and dolls, are proven to keep children occupied for sustained periods.?

Ian Ellis, toys buyer at John Lewis, said: “Loom bands have been hugely popular. We started selling them at John Lewis a couple of months ago and in the last few weeks we have really seen them take off. It has been such a big playground phenomenonwith children wanting the newest colours and sets, we will be introducing more to our range as the trend continues.”

Have drinks to hand they can sip on for take-off and landing so they don’t concentrate on the air pressure; which can affect children more than adults

Bring out different toys at regular intervals. Wrapping them and giving them as presents works really well

Think of games with extended play. Finger puppets and activity cards are both toys that can be drawn out to last a lot longer

Think about games that you don’t need to carry. Verbal games like I Spy and Twenty Questions are good ways to pass the flight time

If it’s an evening or night flight take pyjamas. Getting children ready for bed will help avoid disrupting their sleep pattern.