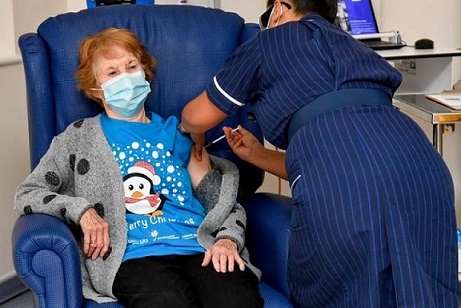 A grandmother who was the first person to receive the Covid-19 vaccine after trials in Britain has said she “feels great” and has returned home.

Margaret Keenan, 90, known as Maggie, left the University Hospital in the city of Coventry in central England, at 2pm (1400 GMT) on Wednesday.

Speaking about being the first person to receive the Pfizer/BioNTech vaccine in the world after trials, she said: “Yesterday was a massive day for me personally and for the rest of the world as we all look to get back to some sort of normality.

“It has all been such a whirlwind and everything hasn’t really sunk in yet. I feel great and I’m so pleased to be able to go home and to spend some quality time with my family.

“I would like to say thank you to the hospital and its staff for the care and support shown to me during my stay: They have been truly amazing.

“My family and I are so grateful for the positive comments and well wishes received. I would urge everybody to get their vaccine as and when they are asked to do so.”

It comes after British regulatory body the Medicines and Healthcare products Regulatory Agency (MHRA) issued precautionary advice to NHS trusts which said anyone who has a history of “significant” allergic reactions to medicines, food or vaccines should not be given the shot.

Two front-line health workers who had a history of serious allergies became ill after receiving the vaccine on Tuesday, the same day Keenan had it and when it was rolled out across Britain.

This means people who have a previous history of anaphylactic reactions or those who have been told to carry an adrenaline autoinjector should not receive the Pfizer/BioNTech vaccine.

In a statement, the medical director of England’s National Health Service (NHS) Stephen Powis said: “As is common with new vaccines the MHRA have advised on a precautionary basis that people with a significant history of allergic reactions do not receive this vaccination, after two people with a history of significant allergic reactions responded adversely yesterday.”

Both patients, were “recovering well,” he added.

All hospitals involved with the vaccination programme have been informed and patients who are scheduled to receive the vaccine will be asked about their history of allergic reactions before being given the jab.

June Raine, the head of the MHRA, confirmed to the British parliament’s science and technology committee that two allergic reactions had taken place and that this “wasn’t a feature” during the trials.

Pfizer told dpa both the US drug company and its German partner BioNTech are supporting the MHRA while it undertakes an investigation.

“As a precautionary measure, the MHRA has issued temporary guidance to the NHS while it conducts an investigation in order to fully understand each case and its causes,” a spokesperson said.

“In the pivotal phase 3 clinical trial, this vaccine was generally well tolerated with no serious safety concerns reported by the independent Data Monitoring Committee. The trial has enrolled over 44,000 participants to date, over 42,000 of whom have received a second vaccination.”

The MHRA is continuing to monitor people who have received the vaccine, which has been proven to be highly effective in preventing Covid-19, the respiratory disease linked to the novel coronavirus.

Hospitals and vaccination centres began giving the vaccines to elderly patients and health workers across Britain on Tuesday, the first country to administer the Pfizer/BioNTech vaccine as part of a national programme, after it received approval from the MHRA for emergency usage last week.