dpa/GNA – China has imposed sanctions on nine individuals – including lawmakers – and four entities in Britain, arguing that they have spread misinformation about China, provoking a sharp response from London in a continuing row about human rights.

The sanctions were announced after London slapped sanctions on Chinese officials earlier this week due to the country’s treatment of its Uighur minority in China’s far-west.

The Chinese side sanctioned individuals and entities that it charged had “maliciously spread lies and disinformation,” a statement by Beijing’s Foreign Ministry read.

Members of the House of Lords David Alton and Helena Kennedy were also listed, as were human rights lawyer Geoffrey Nice, who is chair of the Uyghur Tribunal, and China academic Joanne Nicola Smith Finley.

British Foreign Secretary Dominic Raab responded on Friday by saying: “It speaks volumes that, while the UK joins the international community in sanctioning those responsible for human rights abuses, the Chinese government sanctions its critics.”

“If Beijing want to credibly rebut claims of human rights abuses in Xinjiang, it should allow the UN High Commissioner for Human Rights full access to verify the truth,” his statement said.

One of those sanctioned, Iain Duncan Smith, said angering China was “a badge of honour.”

“It’s our duty to call out the Chinese [government’s] human rights abuse in Hong Kong [and] the genocide of the Uighurs,” he tweeted. “If that brings the anger of China down on me, I’ll wear that badge of honour.”

As of Friday, the named individuals and their immediate family members are prohibited from entering mainland China, Hong Kong and Macau.

Their property in the country will be frozen and Chinese citizens and institutions will be prohibited from doing business with them.

It added that it had summoned the British ambassador to China to “lodge solemn representations, expressing firm opposition and strong condemnation.”

On Monday, Britain imposed sanctions on four senior officials in China and a state-run security organization. It was the first time London had taken such an action regarding the Uighur issue.

Asset freezes and travel bans were put in place under Britain’s global human rights sanctions regime for “systemic violations” against the group and other minorities.

The British action followed similar measures put in place by Canada, the European Union and the United States.

The EU sanctions marked the first time the bloc has issued restrictive measures on Beijing for human rights violations since the Tiananmen Square massacre in 1989.

In the last few years, hundreds of Uighurs, Kazakhs and Huis have testified that they were detained in internment camps in Xinjiang province as part of what observers say is a government campaign to forcibly assimilate ethnic minorities.

The Chinese government says the camps – estimated to have contained more than 1 million people since 2017 – are “vocational education centres” to eradicate extremism and terrorism. 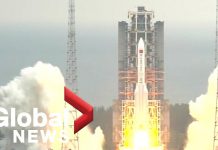 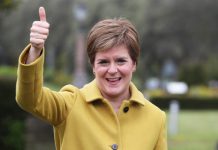