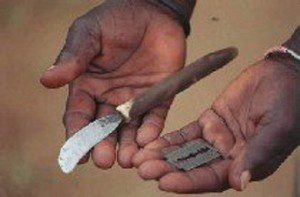 The Banda Traditional Council has passed a law to ban Female Genital Mutilation (FGM) and other outmoded, harmful, traditional, cultural and customary practices in the area.
Mr. Kwabena Badu, the Council’s Secretary told the Ghana News Agency (GNA) in an interview on behalf of Okokyeredom Kwadwo Sito I, the paramount chief of the area on Thursday at Banda-Ahenkro in the Banda District of Brong-Ahafo Region.
Mr. Badu said the FGM, early child marriage and cruel widowhood rites were harming and killing their female adolescents and women in diverse ways.
He said the Council and stakeholders like the District Assembly, the District Security Council, family heads and other opinion leaders collaborated to pass “a documented bye-law to deal with offenders”.
Kyeame Maristo, the chief linguist of the traditional area also confirmed the new law and added that any offender would be sanctioned together with the sub-chief of his/her community.
“Caution notice have been served to all sub-chiefs, community leaders and religious groups in the District in that regard,” he emphasised.
“A minimum fine of GHC1,000.00, a cow and two sheep are the least punishment to any perpetrator,” the chief linguist said, adding that any sanction beyond that  would be decided by the Council based on the level or seriousness of the offence.
Kyeame Maristo said that education and monitoring was on-going to create the necessary awareness and attention among the people in their communities to adhere to the bye-law.
He urged religious leaders, traditional authorities, family heads and corporate bodies in the region and the entire country to assist in advocating the need to end those diabolical practices nationwide.
GNA
Send your news stories to newsghana101@gmail.com and via WhatsApp on +233 244244807 Follow News Ghana on Google News