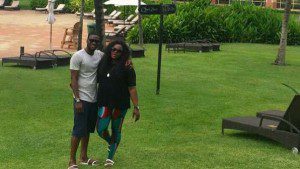 England-based Nigeria striker Brown Ideye has hailed Ghana as a ?nice country? after returning to West Brom for pre-season after spending his summer holidays in the country with his family.

Ideye revealed that he resumed pre-season training with his English Premier League club West Bromwich Albion yesterday after holidaying with his family in Accra, Ghana.

?After family holiday in Accra, Ghana, what a nice country, it is back to training #pre-season mode,? the player wrote on Twitter.

The former Spartak Moscow player signed a three-year deal with the Baggies, becoming the club?s record signing at a fee reported as ?10 million. The contract included an option in the club?s favour for an extra year.

After a difficult start to the season in England, he scored his first league goal for the club in their 3-1 loss to Manchester City on Boxing Day, 2014 and scored four times in a six-day spell in February, 2015 with goals against Burnley and Swansea City in the league and two against West Ham United in the FA Cup helping to resuscitate his EPL career.

Alongside Ideye, Craig Gardner and Craig Dawson were among the group of West Brom first teamers who reported back ahead of the 2015/2016 season with additional players expected today.

Albion face Austrian champions Red Bull Salzburg on Wednesday July 8 in a friendly then return to the UK on Friday July 10 before flying to the USA for a nine-day tour according to their team schedule.