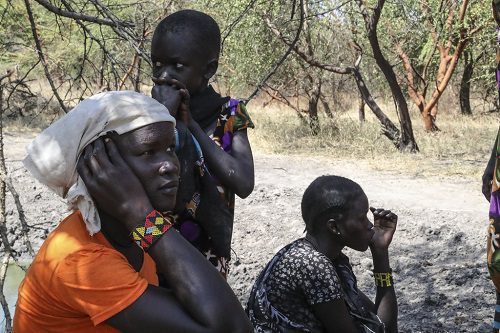 A UN report released Friday highlights persistently high levels of sexual violence in South Sudan’s northern Unity region, with at least 134 women and girls raped, and 41 having suffered other forms of sexual and physical violence just between September and December 2018.

Among the survivors, some were as young as eight. The actual level of sexual violence is likely to be considerably higher than the number of cases recorded.

The report by the UN Human Rights Office and the UN Mission in South Sudan (UNMISS) warns that although attacks against civilians have decreased significantly since the peace agreement was signed on 12 September 2018, endemic conflict-related sexual violence continues in northern Unity.

The sexual violence was committed in a context of “pervasive impunity, which contributed to the normalization of violence against women and girls,” the report notes.

Almost 90 percent of the women and girls were raped by more than one perpetrator and often over several hours. Pregnant women and nursing mothers were also victims of sexual violence.

In one incident alone on 17 December, in the village of Lang in Koch county, five women were gang-raped, four of whom were pregnant, including one who was nearly nine months pregnant.

Survivors of sexual violence described being brutally beaten by perpetrators with rifle butts, sticks, small firearms and cable wires, if they attempted to resist their assailants or after they were raped.

The ruthlessness of the attackers appears to be a consistent feature of the sexual violence documented, the report states. The report also indicates that the perpetrators had a certain level of premeditation.

One survivor told how she and her friends were raped on three separate occasions. With each attack, the number of assailants increased significantly.

The investigation found that multiple factors had contributed to the upsurge in sexual violence in the area, including large numbers of fighters on “standby” mode, awaiting implementation of security arrangements under the peace deal; the presence of many armed youth militia; and a lack of accountability for past sexual violence at the individual and command level.

Given the destruction of livelihoods, forced displacement and food insecurity after years of civil war, many women and girls have to travel long distances through high-risk areas in search of food, water and firewood, the report states.

The report notes a feeling of resignation amongst survivors, and a sense of normalization surrounding the risk of being subjected to sexual violence.

“We women do not have a choice,” one 30-year-old survivor from Koch County said.

We avoided the road because we heard horrible stories that women and girls are grabbed while passing through and are raped, but the same happened to us. There is no escape – we are all raped.”

“The volatility of the situation in South Sudan combined with the lack of accountability for violations and abuses committed throughout Unity, likely leads armed actors to believe that they can get away with rape and other horrific forms of sexual violence,” said the UN High Commissioner for Human Rights Michelle Bachelet.

“Sadly, we have continued to receive reports of rape and gang rape in northern Unity since the beginning of this year.”

“I urge the Government of South Sudan to take adequate measures – including those laid out in the peace agreement – to protect women and girls, to promptly and thoroughly investigate all allegations of sexual violence and to hold the perpetrators accountable through fair trials,” Bachelet added.

The High Commissioner also called on the authorities to ensure that humanitarian organizations can conduct their work without fear of reprisals and with unobstructed access to victims.

Upon receiving initial reports of the increase in reported cases of sexual violence, UNMISS immediately engaged with political leaders and security services.

The Mission also increased peacekeeping patrols and cleared foliage from roads to make it more difficult for attackers to conceal their presence.

UNMISS has been operating a mobile court in hotspots, such as Bentiu and Malakal, to help address the issue of impunity, and intends to work with local judicial authorities to support such mobile courts in prosecuting crimes more widely across the country.