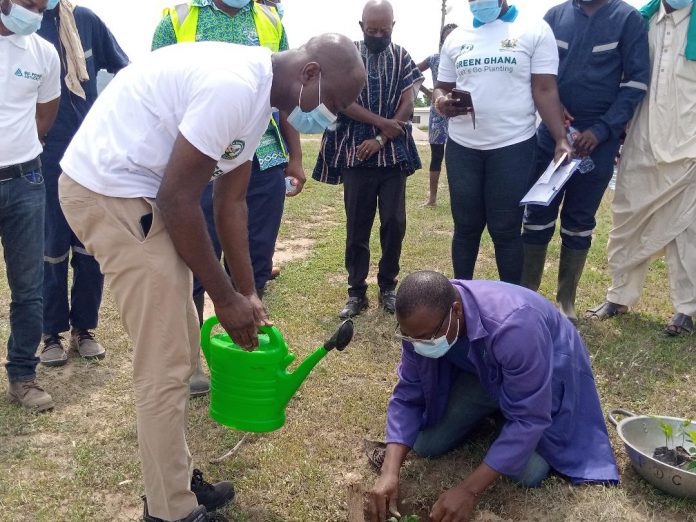 Bui Power Authority (BPA), managers of the Bui Hydro-electric power generating station has re-affirmed its commitment to restore the forest cover affected by the construction of the 400 megawatts dam to make the Bui “Green City” project a reality.

Mr Wumbilla Salifu, the Director of, General Services Department, explained the Authority was on course towards the construction of the “Green City” within the enclave under the hydro-electric power project in the Banda District of the Bono Region.

Already, he said the BPA had cultivated 400 acres of tree plantation, which contained Mahogany, teak, cassia, oframo and other tree species under it’s Forest Resource Enhancement Programme introduced in 2012.

Mr Salifu said this when the Authority held a symbolic tree planting exercise under the government’s “Green Ghana Project” at Bui to encourage the resettlement communities to engage in tree planting.

He said the BPA had planted additional 22,000 trees and it was expected to cultivate 30,000 trees within the enclave by the close of the year.

He added the Authority had already provided and cultivated several trees in the resettlement communities to serve as windbreaks and guard against flooding as well.

“The Forest Service Division has supplied us with 400 trees and we are planting many of the trees in the communities and along our roads to mark the day” Mr Salifu added.

Nana Kwadwo Wuo II, the Chief of Bui commended the government for the “Green Ghana Project”, and called for concerted and decisive measures to control illegal logging activities in the country.

He expressed concern about the indiscriminate felling of trees for charcoal burning in the enclave and appealed to the BPA to help arrest the problem.