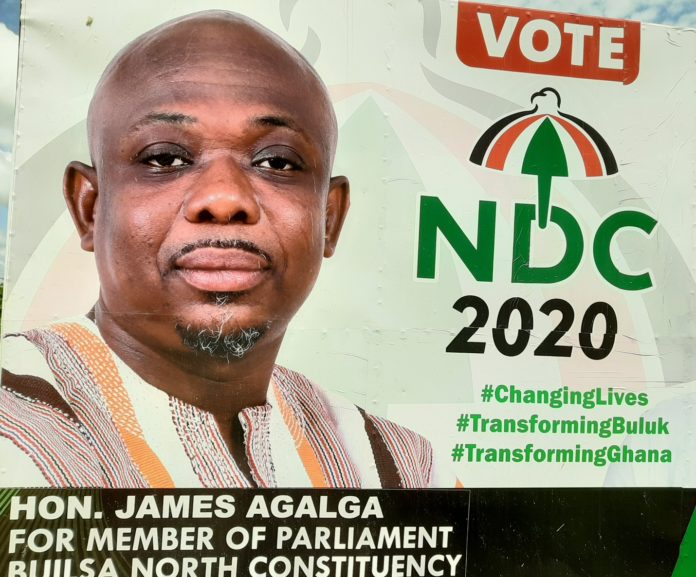 Mr James Agalga, the Parliamentary aspirant for the Builsa North Constituency of the National Democratic Congress (NDC) says the Constituency deserves to have quality representation in Parliament to advocate the development of the area.

“My tenure has brought about a lot of transformation to the Constituency,” Mr Agalga, the incumbent Member of Parliament (MP) for the area, told the Ghana News Agency in an interview at Sandema, the Builsa North District capital.

He said if the NDC was voted back into government, and he got the mandate of his constituents to represent them again, they would continue all the projects that were started by his Party and were abandoned by the New Patriotic Party’s administration in the Constituency and across the country.

Mr Agalga said the Sandema-Chuchuliga road was awarded on contract in May 2016, and by December, 22 per cent of work was completed, “NPP came to power and decided to abandon these projects, and claimed they were doing value for money audits.

Mr Agalga, who is also the Ranking Member of the Defence and Interior Committee of Parliament, and former Deputy Minister for the Interior said the source of funding for the roads project was the Road Fund, “The taxpayer’s money goes into the road fund for projects of this nature, he added.

“We started this project so, in the next NDC government, we shall complete it in no time.”

He said most irrigable lands in the Region were found at Fumbisi in the Builsa South District and noted that if the road network from the Regional capital, Bolgatanga to Fumbisi was good, it would facilitate the movement of farm produce to market centres.

“The road is very bad, if you send investors there, the road network alone will discourage them. Those valleys are very fertile, and are the food basket of the entire Region,” he said.

Responding to the blame that he could have put some infrastructure in place when he was Deputy Minister for the Interior to solve the reported cases of armed robbery attacks in the area, Mr Agalga said “Those who are blaming me are not aware of the responsibility of the Ministry, it is not about infrastructure, the Ministry of Interior is not an infrastructure Ministry.