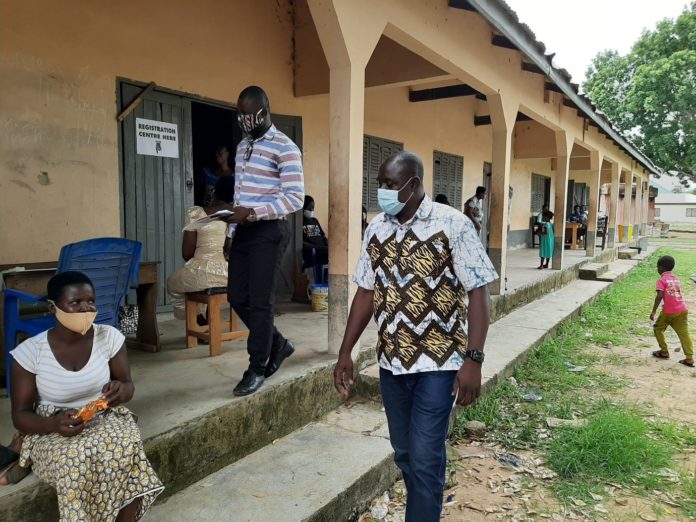 The New Patriotic Party Parliamentary Candidate (PC) for the Builsa North Constituency of the Upper East Region, Mr James Maurice Abakisi, has lauded the registration exercise in the constituency.

He described the process as “peaceful” and devoid of major challenges, saying he was satisfied with the exercise at all the centres he visited within his constituency, since the nationwide exercise began.

He said “Apart from some few hitches, which were quickly fixed, so far, I am satisfied with what is going on and what I am seeing for now. We can’t have a perfect system, but so far it has been peaceful and orderly.”

Mr Abakisi who spoke to the Ghana News Agency in an interview at Sandema, while monitoring the exercise, added that he did not receive any report of foreigners trying to register during his visits to the registration centres.

He said even though there might be some speculations that some people were planning to smuggle people into the District to register, “We haven’t had any real case yet, we are watching to see what happens.”

Mr Abakisi implored his constituents to continue to observe the Ghana Health Service protocols of keeping social distance, wearing of face masks, frequently washing their hands with soap under running water and avoid touching their mouths, eyes and noses.

He said it was critical for his constituents to observe the COVID-19 protocols to stay healthy and alive, and cast their votes for him and the NPP government to retain power and continue with the development agenda of the country.

He encouraged all eligible voters to register for the new voter card to exercise their franchise in the December Presidential and Parliamentary elections.

“If you don’t participate and look adamant about the process, others will vote for people that you don’t like, you are voting for development and you have to tell your own story as to who you believe can develop your area for you.”

Touching on the importance of the voter identification card, Mr Abakisi noted that the card was not only to enable eligible voters to cast their votes during elections but would be needed for other official transactions.