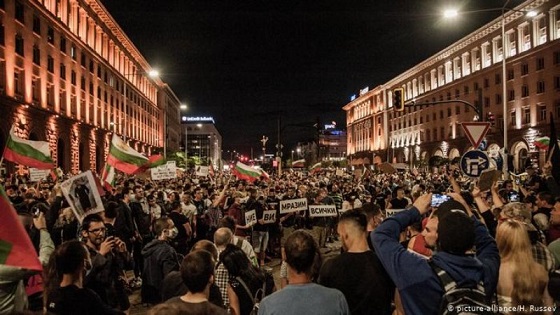 The daily evening protests against the Bulgarian government have come to an end after almost four months.

The government quarter in Sofia was unusually quiet on Monday evening, after 116 rallies and demonstrations on consecutive nights.

The protest organizers, dubbed the Toxic Trio, said they were changing their strategy and cited the coronavirus as a reason.

The time had come to change the protest and opt for targeted citizen initiatives, the trio wrote on Facebook.
Since July 9, protesters have been taking to the streets to demand the resignation of the government under Prime Minister Boyko Borisov, which they accuse of corruption.

One of the main successes of the protest movement was to call international attention to these corruption allegations, the organizers said.

“We have woken up the European parliament,” they wrote. In a resolution issued on October 8, the EU parliament said the state of the rule of law, democracy and human rights in Bulgaria was deteriorating.

Borisov, however, refused the resignation of his Cabinet due to “responsibility in the coronavirus crisis.”