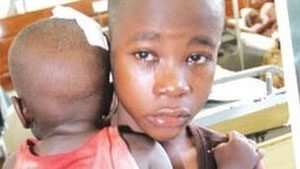 A photo of Satrin Osinya held by his older brother after the attack ? and the X-ray showing the bullet

A bullet lodged in the brain of an infant boy during an attack on a church near Kenya?s coastal city of Mombasa has been removed following an operation, a hospital spokesman says.

Doctors believe the bullet which killed her while she was shielding her son exited her body and buried itself in his head during the attack.

No group has said it carried out the shooting on 23 March.

The bullet was removed during a three-hour operation at the Kenyatta National Hospital in the capital, Nairobi, chief neurosurgeon Mwangi Gichuru said.

?The baby is fully awake and he is back to his old state,? he said.

Satrin Osinya was flown with his father to the hospital two days after the attack for specialised treatment.

At the time, doctors described his condition as stable and said they would remove the bullet once the wound healed.

Kenyan police say the attack on the church in Likoni could have been an ?act of terrorism?.

At least two gunmen burst into the church and started shooting indiscriminately.

The attackers managed to escape on foot before the police arrived.

Blood-soaked Bibles and overturned chairs lay strewn across the church?s floor after the shooting.

There have been several incidents of violence in Mombasa in recent months, involving the security forces and Islamist militants.

The Somali al-Qaeda group al-Shabab has carried out several attacks in Kenya since 2011, when Kenya sent troops into Somalia to battle it.

On Monday, six people were killed in explosions in the Eastleigh suburb of Nairobi, which has a large Somali population. No group has claimed responsibility for the blasts.

Four al-Shabab members were behind the four-day siege at a shopping centre in Nairobi last September, in which 67 people died. 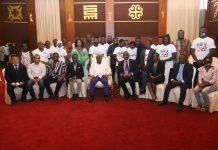