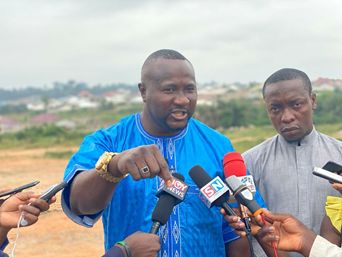 An activist of the New Patriotic Party (NPP) in the Asokore Mampong Municipality is calling for a swift resolution of an impasse between some land owners and the Member of Parliament (MP) for the area, Mohammed Muntaka Mubarak.

Alhaji Ali Suraj believes any further delay in addressing the long-standing dispute over a piece of land earmarked for a hospital project could trigger violent clashes.

About 100 residents in the Asokore Mampong Municipality are claiming ownership of the 19.06 acre land, but the MP insists the government owns the property and that whoever encroaches does so at their own risk.

It would be recalled that the aggrieved residents held a press conference last week to register their displeasure about the MP’s determination to deny them what rightfully belonged to them.

According to them, they properly acquired the land from the late Chief of Kenyasi, Barima Owusu Agyemang and produced several documents to back their claims.

But the MP when contacted by the Ghana News Agency (GNA) rejected the allegations levelled against him and entreated the people to be content with part of the land allocated to them.

He maintained that the government owned the entire land, but he personally led a negotiation in 2016 to cede part of the land to the people on humanitarian ground.

Muntaka also furnished the GNA with documents to counter the claims of the residents including the number of plots allocated to each of them.

But Alhaji Suraj told journalists that the MP’s posture as a leader in the Municipality was not helping matters and cautioned that the impasse could disturb the peace in the area if not properly handled.

“I think the MP will take matters to parliament so that a committee would be set up to probe the case and establish the true owner of the land,” he suggested.

He said that was the way to go, to find a lasting solution to the problem in the interest of peace and security.

He also called on chiefs, imams and opinion leaders in the Municipality to step in as soon as possible before the dispute escalates.

“Let us all come together as stakeholders to settle this case amicably and protect the peace in our community,” he said.