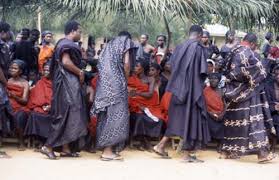 Human Interest, confusion at burial service (Gharbin)
The usual solemn atmosphere that characterizes the final funeral rites of the dead, was almost marred when the two families of a deceased and the widower, engaged in free-for-all fisticuffs during the burial service of a renowned magistrate, Mrs. Faustina Mary Addington, at the St. Francis de Sales Catholic Church in Cape Coast. The widower, Mr Gustav Addington , also an astute legal practitioner in Cape Coast, had the shock of his life at the turn of events.

As at the time that the Ghana News Agency got to the place, family members, mostly women, were at each other?s throat, insulting and cursing one another, with two hearses parked at the entrance of the church, to convey the corpse to the cemetery

Police personnel deployed to forestall peace did everything within their means to restore calm.

An old lady, believed to be in her 80s, and a family member of the deceased, was pushed down by some members from the widower?s family, after calling her ?aboa? (animal).

She was helped onto her feet by some police personnel, amidst shouts of ?witch, witch? from her assailants.

A woman, who claimed to belong to the widower?s family, hinted the GNA that the feud between the two families, started some years ago when the family of the deceased objected to the widower?s quest to enroll the deceased at the OLA College of Education during the early part of their relationship.

Since then, according to the source, the family of the departed woman had borne a grudge against the man.

A source who claimed to be from the man?s family alleged on condition of anonymity that the problem started on Thursday when the widower went to convey his wife?s body from the morgue at Batanya, in the Abura-Asebu-Kwamankese District, to prepare it for the family wake.

He said the family of the deceased who had also gone to the mortuary for the same purpose, clashed with the man?s family, but calm was restored and the widower was allowed to convey the body.

The confusion, he said, reared its ugly head on Friday morning after the family of the deceased sought to change the dresses of their loved one, and convey her in a hearse they had hired, after the burial service for interment.

This action, according to the source, incurred the wrath of the widower?s family who had also brought a different hearse to take their departed family member for interment, resulting in the free-for-all fight and insults between the two families.

The centre of attraction was this woman who was limping on a hand clutch, and believed to be from the widower?s family, who was shouting on top of her voice, casting insinuations and pouring invectives on the family of the deceased.

She, however, managed to inject some humour into the tensed atmosphere through her hilarious ranting, with others taking delight in her comedy and bringing some nerves down.

When the police finally managed to restore calm, the deceased was conveyed to her final resting place in the hearse brought by her husband with police escort, amidst shouts of ?we have claimed our rightful corpse, thank you police,? from the family of the widower.

When a priest was reached, he declined to comment by zipping his lips with a gesture.

Earlier during the service in an autobiography of the diseased, she praised her husband for pushing her to greater heights from a pupil teacher to a magistrate, paying her school fees from teacher training though to the law school, in addition to taking care of their five children.