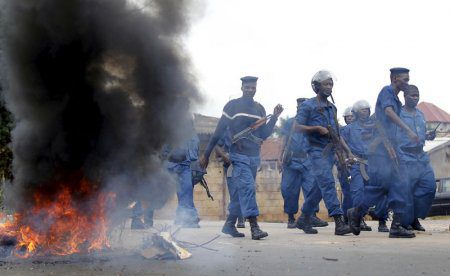 The Burundian security ministry has strongly condemned grenade attacks that happened Monday evening in two separate places in the commercial capital Bujumbura, describing them as terrorist attacks, the ministry said Tuesday in a press release.

“Unidentified terrorists blasted three grenades around 19:00 local time (17:00 GMT) in the district of Mukaza in the commercial capital Bujumbura. Two of them were blasted in the city center at the main bus station near the former central market of Bujumbura in Rohero zone whereas the other was blasted near the market of Jabe in Bwiza zone,” said the press release.

According to the ministry, those devices killed two persons, one on the spot at the bus station and another one who succumbed to his injuries at the hospital where police had evacuated him for medical care.

The ministry indicated that the three grenade explosions left wounded persons, including one who was seriously injured.

It seized the opportunity to extend condolences to family of the deceased and prompt recovery to injured persons.

The ministry pledged to carry out investigations in order to kick away those terrorists.

On Sunday evening, at least two persons were killed and 15 others injured, most of them seriously, in a grenade attack in a bar in Burundi’s political capital, Gitega.

The provincial police commissioner in Gitega province, central Burundi, said a couple, who were taking drinks in the bar, located near the main bus station of Gitega town, died in the attack, adding that six suspects were arrested for further investigations.

The Burundian RED-Tabara rebel group, based in the eastern Democratic Republic of Congo, claimed responsibility for the airport attack, which caused no damage. Enditem