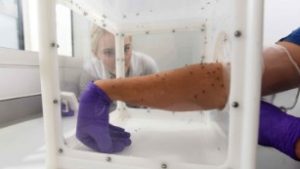 He said patronizing such an initiative would go a long way to enable the private sector and civil society organizations to work towards a common goal of making Ghana a malaria free country.

Chief Nyanor-Fosu said this during a day’s “Malaria Safe Business Networking Event” for businesses in Takoradi.

The programme which was attended by various companies including AngloGold Ashanti, Benson Oil Palm Plantation (BOPP), Association of Ghana Industries (AGI), Ghana Employers Association (GEA) and the Takoradi Chamber of Commerce and Industry (TCCI) was to outline the benefit of the Safe Malaria Initiative.

The event was also used to educate the participants on the malaria burden on businesses and for companies to share their experiences on the effects of malaria on their businesses.

Safe Malaria Initiative Project is being executed by Private Sector Malaria Prevention Project (PSMP) in collaboration with the John Hopkins Centre for Communication Programme, and the National Malaria Control Programme (NMCP) with support from the United Kingdom Department for International Development (DFID).

The project is geared towards supporting companies and institutions to increase their productivity and reduce absenteeism rates due to malaria and other related illnesses, through the adoption of preventive methods such as the use of long Lasting Insecticide Treated Nets (LLITNS) by their workforce.

It is currently being implemented on a pilot basis in Greater Accra, Ashanti and Western regions where companies are being advised to adopt the Malaria Safe action which has been categorized into four pillars of Protection, Education, Visibility and Championing.

Mr Nyanor-Fosu said distributing insecticide-treated nets and providing ITN education to employees and communities are key recommended actions in the protection and education pillars, whiles championing and raising visibility of malaria prevention efforts motivate people to use the nets and inspire other institutions to invest in the effort.

“The malaria safe guide was developed based on best practices, resources and experience of companies that have been committed to the fight against malaria in Ghana and across endemic Sub-Saharan Africa”, he said.

Mr Nyanor-Fosu said a survey conducted in 62 companies revealed that malaria resulted in economic losses of US$6.58 million over a two year period (2012 to 2014) and nearly 4,000 workdays due to absenteeism.

He said companies that partner with the PSMP project and adopt the Malaria Safe pillars would be taking the necessary steps to protect their employees and communities from malaria.

Mr Nyanor-Fosu urged companies not to only buy Treated Insecticide Nets for their workforce but to ensure they slept in them to reduce the incidence of malaria cases in the country.

First-ever Pharma Healthcare Exhibition To Be Hosted In Accra