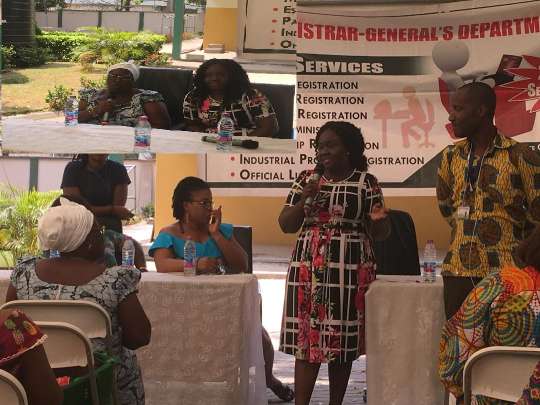 Amounts charged for the renewal of businesses are not meant to share the profits of business owners, Ms Constance Takyi, Public Relations Officer for the Registrar General’s Department (RGD) stated in Accra.

She said the renewal charges were simply meant to cater for the services rendered by the Department on behalf of such registered businesses.

Ms Takyi made the remarks during a sensitisation forum organised by the RGD in Accra to encourage traders to register their businesses and also expose them to the operations of the Department.

She explained that failure to renew one’s business after the deadline and extra four months ‘grace period’ attracted a penalty of an extra GHC 400.00 to the original renewal charge owed.

She said the yearly renewals for sole proprietorship was GHC25.00 but for Associations such as Market Associations and the like, renewals stood at GHC50.00.

Ms Takyi alerted them to be aware of those who paraded about claiming to be with the Department and asking market women to pay monies through various Mobile Money Accounts.

“Others even call you asking for payments to be done to these lines. Note that these people do not work with us, all payments and transactions are to be done at our office,” she added.

She stated that business owners, who opened new branches of the same business across the country, did not have to register those branches anymore.

“All you need to do is to alert the Department about the addition of those new branches so that your data would be updated,” she advised.

Madam Elizabeth Okailey, Vice President for the Greater Accra Market Association said for all these years, they were in the dark about the services offered by the RGD making them to fall prey to the schemes of fraudsters.

The Vice President called on all market and business folks to apply the knowledge they received at the event and abide by the rules and regulations of the Department to be in good standing with government.

She said they would act as ambassadors and carry the message across to their colleagues to also be well informed.