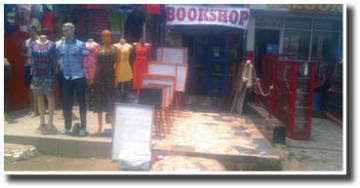 Grief and palpable tension still rent the air across most parts of Ikotun, a densely populated suburb within the Lagos metropolis. Since Friday, September 12, 2014 when a six-storey building within the premises of the Synagogue Church of All Nations led by popular prophet, Temitope Balogun Joshua, collapsed, killing over 80 and leaving more than 100 injured, things have not remained the same for the church, its immediate neighbours and the entire Ikotun community. The church area has witnessed double the size of its normal visitors, with many coming from far and near to experience first hand, the level of devastation.

But while the sudden increase in traffic to this part of Lagos has been the gain of commercial transporters, it hasn?t yielded much returns for many business owners around Joshua?s SCOAN. A handful of them told Saturday PUNCH that the latest tragedy apart from sparking a drop in daily sales and earnings, has also left many of them deeply worried about their safety. Many told our correspondent that the large presence of security operatives and strange faces in the area since last Friday has heightened tension around the place.

?Business has been very dull since last Friday,? a restaurant operator opposite the church simply identified as Ada Jesus, said. ?Ordinarily if you come here on normal days especially on Fridays when there are so many visitors around, the entire neighbourhood would be filled. If you get to my shop at such periods, you won?t even find a place to sit because everywhere would have been filled up.

?Though, on the Saturday after the incident, a lot of people who came to sympathise with the prophet and church attendees still visited my shop and also patronised many business operators around, sales have dropped drastically since that time. We hardly make half of what we used to make these days after the building collapse. I believe it is a phase that would pass,? she said with a tinge of optimism.

Ada is not the only one hoping for a rapid change in fortunes ? at least to what business used to look like before last week?s tragedy ? there are scores like her who the latest development has left a bit worried.

Austin Isaac, manager of OJ Guest House also opposite the church, explained to our correspondent what business has been like since the building came crashing. Like Ada, he cannot wait for things to get back to normal.

?Business has been fluctuating for some days now, especially since the building collapse inside the church last week. But I believe what happened last week is an act of God and I know He would make things normal again. As a result of this, the number of guests at our lodge has reduced slightly but we are still in business and hoping for some improvement very soon,? he said.

Jonathan Nwankwo, a supermarket owner opposite the church, told Saturday PUNCH that business is now a distant contrast from what it used to be a few days ago before the latest tragedy came knocking. He gave an account of events leading to the collapse while hoping, like Ada and Isaac, that the lull in business would not last for too long.

?The entire incident came as a big surprise to many of us living and doing business around this place. We noticed an aircraft flying so low around the church for sometime before the building eventually collapsed on that day. Many of us were already apprehensive, confused about what the mission of the plane was around the place. We were all very concerned because our businesses and other activities benefit from the visits to the church.

?At the moment, business has been quite dull because if there is no church activity, there is no business for us. Most of our customers are people who visit the church for various reasons. This is really giving us concern and we hope that things will improve soon,? he said.

Another guest house manager in the area, Yemi Magbohunje, also expressed worry at the slow pace of business since that devastating collapse at the Synagogue on September 12. Though, guests still frequent their facility, the volume of patronage especially by visitors from far places within Nigeria and other countries has sharply reduced since the sad development, he revealed. Magbohunje is eager to see business bubble back to life.

?Our rooms are all fully booked for most parts of the week as a result of steady flow of visitors who travel from very far places to come to the church. Many of these people lodge for several days and even weeks but since about a week ago, we noticed a drop in customers. Initially I thought maybe some of the customers were no longer satisfied with our services but when I interacted with some colleagues in the business, they told me they were also experiencing the same. That is to tell you how important the church is to our businesses especially those of us very close to it.

?Personally, I am not too worried because I know that after all the excavation work has been concluded and things settle, people especially visitors from far places would feel safe to visit the place again and also patronise us. But for now, I won?t lie to you; business has dropped a little,? he said.

Francis Ebuka, a shop owner who sells spiritual items like olive oil and Bibles at Ikotun round-about, is also feeling the heat. Though he disagreed that the collapse of the six-storey building inside the Synagogue last week Friday is directly responsible for the slow pace of business as witnessed in most places close to the church, he conceded that there has been a significant drop in sales since that time.

?I do not believe the building collapse made business look the way it is at the moment,? he said. ?Business can be that way at times. Most of my customers are people who are visiting the church for special prayers and who come to buy olive oil and some other items. Since a few days ago, sales have reduced but I am not saying it is what happened at the church that has caused this. God has a purpose for everything.?

Over the past few days, SCOAN and its founder ? TB Joshua ? have been in the spotlight, grabbing all the headlines for different reasons. While the number of dead and injured has continued to provoke emotions from around the world, especially from families of victims who according to reports were mostly foreigners, critics have used the opportunity to rain hard knocks on the Ondo State-born preacher whom they consider too controversial especially for his prophecies often predicting tragic events. Joshua and his foot-soldiers have been working tirelessly to absolve the church of any blame in the collapse of the building in the face of mounting condemnations. Reports say the structure was originally a two-storey project but later increased to six without due recourse to the danger it could pose to the safety of lives and properties. But in a swift reaction, the Synagogue founder described the incident as an attempt on his life by enemies. The blame game has continued.

Earlier on Tuesday, South Africa?s President, Jacob Zuma said 67 South Africans lost their lives in the building collapse. But fielding questions from journalists at the site of the tragedy on Wednesday, spokesperson for the National Emergency Management Agency, Ibrahim Farinloye, said they do not know where Zuma got his figures from as they were yet to unravel the identities of the victims.

?The South African president is not a Nigerian and is not in Nigeria. How he got his figures we do not know. He can speak on his own based on the facts available to him. Our major focus now is on the emergency phase after which we would begin the process of identification and investigation,? he said.

Heavy duty equipment were seen digging through the rubble for more bodies and possible survivors while the entire vicinity of the wreckage smelled of human flesh. Stern-looking police officers were seen manning strategic positions within the church premises with visitors not allowed to loiter around the place.

FPAA condemns the use of race, skin complexion as face of Monkeypox