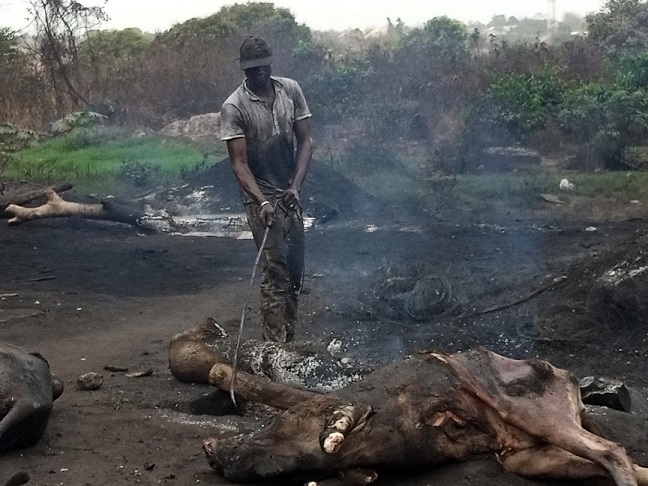 Butchers in the Wenchi Municipality of the Bono Region have expressed concern about the poor sanitary conditions at the Wenchi slaughter house.

They said the condition at the Boadan slaughter house was a serious public health threat and appealed to the government to rehabilitate the facility to prevent the outbreak of diseases.

During a visit, the Ghana News Agency (GNA) noticed the butchers slaughtered and dressed animals on the floor.

Only a cleaner engaged by the assembly worked around the entire facility.

The drainage system around the facility is poor and the only manhole that collected liquid waste is full of debris.

In an interview with the GNA, Alhaji Seidu Mamudu, the Wenchi Municipal Chief Butcher, said persistent appeals were made to the Municipal Assembly to rehabilitate the facility but to no avail.

He expressed fear that the unhygienic condition could trigger the outbreak of communicable diseases if the deplorable conditions were not addressed.

“The situation is very bad and a serious public health hazard. It is very difficult now to collect revenue from the butchers because many of them have resolved not to pay until the facility is renovated,” Mr Simon Gameli Kusorgbor, the Acting Wenchi Municipal Veterinary Officer, told the GNA.

He said revenue generated from the facility fell to about 50 per cent and appealed to the Municipal Assembly to address the problem.

“The slaughter house is not conducive for slaughtering animals for human consumption,” he said, adding that despite the unhygienic condition, butchers from parts of Bono, Bono East, and Ahafo Regions used the facility.

When contacted, Dr Prince Kwakye Afriyie, the Wenchi Municipal Chief Executive, said the Assembly was working to address the situation.

He said the butchers had failed to relocate to a new site despite several engagements with them.

“Until the butchers relocate, it would be difficult to carry out any major rehabilitation work,” Dr Afriyie said.

Meanwhile, residents had complained about the situation and appealed to the assembly to relocate the butchers.

They said they were uncomfortable with the stench that emanated from the slaughter house, particularly during the rainy season.

Some of the residents told the GNA on condition of anonymity that during the wet season, liquid and waste materials from the facility flooded parts of the Boadan community due to poor drainage systems.