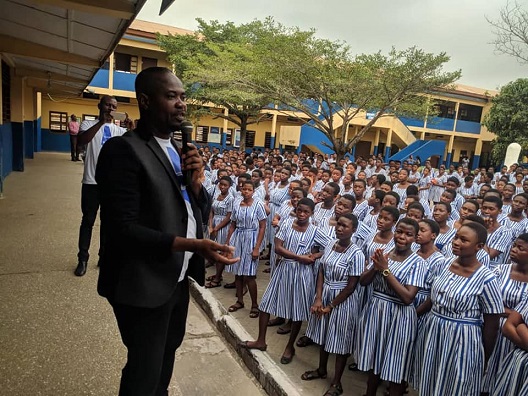 The campuses of various Senior High Schools (SHS) in the Central Region on Monday were akin to central business districts on a market day as the schools received their first-year students.

Hundreds of visibly elated fresh students, accompanied by their parents and guardians, thronged their respective schools to officially report and submit themselves to the various processes to absorb them.

This year, registrations, including the acquisition of prospectus, were done online, mitigating the challenge of travelling back and forth to school until the date of reopening.

Long queues and crowds under trees, tents and other locations characterised the admission processes when the Ghana News Agency visited some selected schools Monday.

Long queues of students and parents waiting for their turns to turn in their admission documents to registration officials for perusal and confirmation were the order of the day.

Students who passed the documents stage were directed to their various dormitories, with the assistance of their seniors who inspected the prescribed items supervised by their respective house masters and mistresses.

At the Mfantsipim School, the fresh students were seen in white shirts and khaki trousers standing beside their trunks, ‘chop boxes’, and other items as they waited for their turn to be attended to.

Reverend Ebenezer Aidoo, the Headmaster of the school, told the GNA that the arrival process had so far been “very simple and smooth”

He assured parents that their wards were in safe hands and that they would be well taken care of.

“Parents should pray for their boys as they have brought them to taste the Mfantsipim brand. For the students, I assure them of excellent and holistic education so that in the end, they will be transformed to go out there to affect society positively,” he said.

He noted that the school would use the entire week to orientate the students and start serious lesson from the next week.

The situation at St Augustine’s College was not different as hundreds of people were seen sitting and chatting in groups under trees during the registration process.

After about 30 minutes of observation, the GNA lost count of the students who kept trickling endlessly either in taxis, private cars or carrying their items on their heads.

Mr Henry Arthur-Gyan, the Headmaster of the school, also intimated that the process had been without any challenge because the school was well prepared ahead of the arrival of the students.

He gave the assurance that the place was safe and that the staff were ready to receive and stay with the more than 800 students who were admitted to the school.

Some parents who spoke with the GNA said they were incredibly happy with the process because it had been fast and event-free.

A parent, Mr Fifii Acquaye said it took him less an hour to go through the entire process and lauded the school authorities for their hard work and innovation.

A guardian, Mr Nathaniel Fredericks corroborating the account of other parents and the headmaster, said the online registration had made things easy for them on campus.

“We haven’t gotten any challenges, everything is on point,” he added.

At the Holy Child school, there was a long queue of vehicles scrambling to make it up the hill where the registration process was taking place.

Many students and parents were forced by the situation to alight and drag their items along with them.