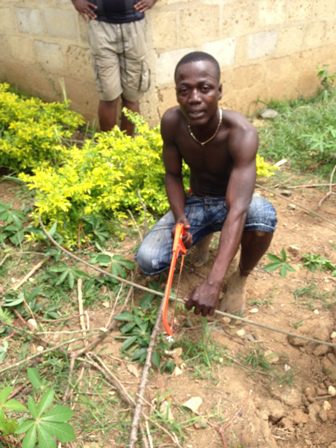 A combined team of security personnel, working for AngloGold Ashanti and G4Security, has arrested a 24 – year man, suspected to be a key member of the Obuasi cable stealing syndicate, which have taken vandalisation and violent stealing as their means of livelihood. The syndicate has eluded the police for far too long causing ?mayhem? to power and water supply in the municipality. The arrest of Kwesi Wantu, a resident at Aduaniyede, a suburb of Obuasi, followed a reliable ?tip off? from the communities. Wantu was caught cutting one of the poles with hack saw blade. To get access to the copper cables, which transmit power to the Jimiso Dam, Wantu and his dangerous accomplices have to cut the poles first.

The municipal police, which has conspicuously failed to net the syndicate, has confirmed that that Wantu is in their custody as investigations are underway to ascertain the level of his involvement in the cable stealing syndicate. ?We are looking for information which will lead to the arrest of other members of the syndicate and our hope is that Wantu will give us the needed lead?, a policeman associated with the investigation said.

?The cable thieves come from the communities and behave like ?kings? when the sun goes down; they earn their livelihood through stealing, they have no mercy for their victims and always looking for easy way to make money?, a 45 year old farmer who called for anonymity said. ?The police has not been aggressive on them and they will continue stealing the cables as long as the police seems not to be in hurry to cause their arrest?.

Meanwhile driven by its core community values to ensure the people in the communities where it operates benefit from its presence; AngloGold Ashanti, which built the dam about 40 years ago and also provides power to the dam, is reported to be providing new poles and power at its own cost to ensure the dam is put in full steam.