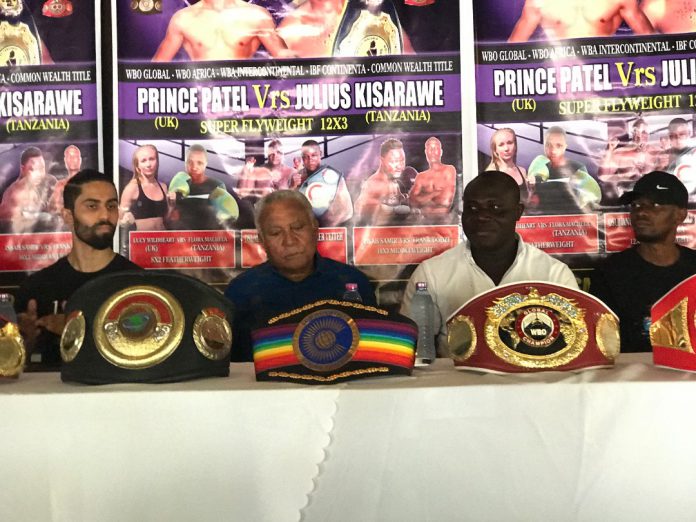 Cahaya Lounge at Adjirigano in Accra will be the hot spot for boxing lovers as they host the ‘Night of Championship’ on Saturday 27th March, 2021.

At the press conference on Tuesday to launch the international promotion by SOAQ Empire Boxing Promotions, former GBA President and current WBO Africa boss Samir Captan commended the government for supporting Ghana Boxing in the midst of the coronavirus pandemic, and promised that all safety protocols shall be put in place.

He said seven title belts will be up for grabs in the cracker, and prayed that the best boxers will win. He announced that there will be no gate fees, as the event is strictly by invitation.

D.K. owner of the Cahaya Lounge said it is about time boxing is commercialized and monetized for the stakeholders to benefit

Confident 28 years old Patel with 26 fights, one defeat, two draws and 23 wins will face Tanzanian Julius Kisarawe who has 40 fights with 32 victories against seven loses and one draw

“Kisarawe is another challenge and winning will give me the edge for a shot at the world title” Patel told Yours Truly.

Both boxer looked poised for a great meeting and fans will have much to cheer about.

In other supporting championship bouts Ebenezer Tetteh will face Osmanu Haruna in a 12 rounder co-main event of the night and battle for the WBA Pan Africa heavyweight belt.

Former Ghanaian middleweight champion Issah Samir will take on Frank Dodzie in a 10 round contest on the bill.

Michael Anyetei Patterson, match maker turned boxing consultant said there will be other exciting supporting bouts which will be announced at the weigh in on Friday at the Cahaya Lounge Adjiringanor, Accra.