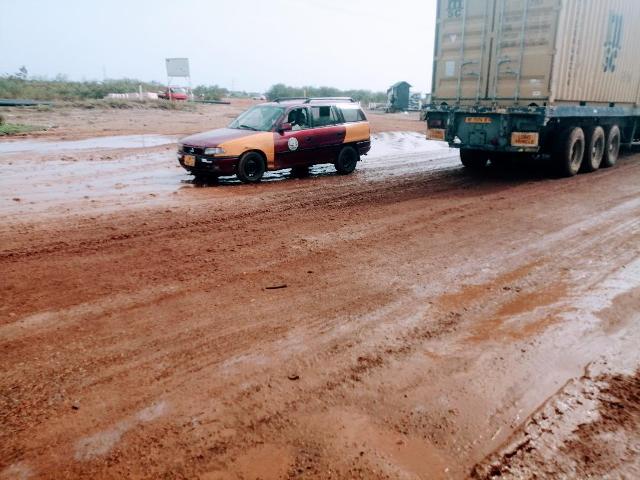 Taxi drivers plying the Calypso to Michel Camp road within the Nmlitsakpo Electoral Area have threatened to embark on a demonstration over the poor state of roads within the area.

The 2.3 kilometre stretch of road from the Kpone barrier to Michel Camp gate and another 2 kilometers from Bediako Junction to Bediako has been left unattended since 2016.

The intended demonstration was expected to feature commercial drivers from Tema, Ashaiman, and the local Taxi drivers to compel authorities to fix the bad roads within the communities.

In an interview with the Ghana News Agency on Tuesday at Saki near Tema, Mr. Rexford Ntiamoah, chairman of the local taxi union at the Kpone Barrier branch noted that the union was left with no option than to demonstrate against the poor conditions of roads within the various communities.

He lamented that, due to the poor state of the main Calypso to Michel Camp road, drivers spend more monies to buy spare parts as the bad road causes their cars to break down frequently.

Mr. Ntiamoah noted that several letters have been sent to the various stakeholders including the Kpone-Katamanso Municipal Assembly to get the road fixed but has since not yielded any positive result.

The Local Chairman explained that the police had on several occasions stopped them from embarking on their intended demonstrations; but “We will not allow the Police to stop us again”.

Mr Prince Paul Zokah, a taxi driver in the area also mentioned that the state of the road was unacceptable but unfortunately this is what we use daily.

He said the Municipal Assembly could at least reshape the road to make it vehicle worthy for both pedestrians and commercial drivers.

According to him, they pay road-worthy levies but the roads were not worthy for use a situation he stated was not acceptable.