The line-up for the FIFA Confederations Cup Russia 2017 is complete as new African Champions, Cameroon are the eighth and final confirmed participant at the Tournament of Champions following their triumph at the 2017 CAF Africa Cup of Nations in Gabon. 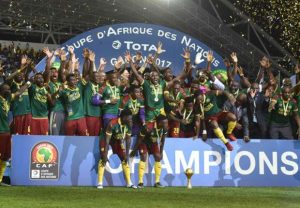 The young unknown new Indomitable Lions came from behind to defeat Egypt with experience stars like El Hadary, Mohamed Salah 2-1 in the final in Libreville thanks to second-half goals from substitutes Nicolas N’Koulou and Vincent Aboubakar.

The Indomitable Lions of Cameroon will join Australia, Chile, Germany, Mexico, New Zealand, Portugal and hosts Russia at the tournament, which runs from 17 June to 2 July. The competition gives each confederation’s best teams the chance at more glory on the very same stage that will host the FIFA World Cup, the greatest footballing show on earth, one year later.

The 2017 Africa Cup saw legends like Roger Milla, Samuel Etoo, Macel Dessailly, Abdul Razak gracing the final.
Burkina Faso beat Ghana who paraded a rather young set on Saturday to claim the Bronze medals with a strike from Alain Traore.