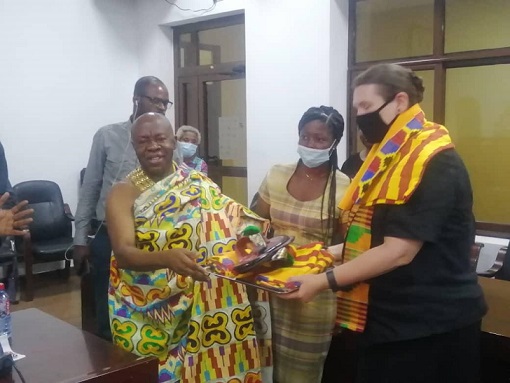 The Canadian Ambassador to Ghana, Kati Csaba has paid a courtesy call on the National House of Chiefs in Kumasi as part of her official visit to the Ashanti Region.

The Ambassador who is expected to announce a financial package to support the fight against COVID-19 in four hospitals in the Ashanti Region on Thursday, took advantage to call on the House of Chiefs.

She said Ghana had a long history of cooperation with Canada dating back to over 100 years and bilateral relations between the two countries had existed since Ghana’s independence.

“We a very conscious of the fact that traditional leaders play an important role in their communities and the country as a whole. You are also playing equally important role in promotion of peace, protection of culture and traditions,” she stated.

She said Canada had much to learn from the role that traditional chiefs in Ghana played in national development through indigenous traditional leadership.

The Ambassador noted that “it is important for me and my colleagues while we are here to learn as much as possible from the meaningful inclusion of indigenous customary practices into our lives.

She stated that one of the priorities of Canada in its relations around the world was empowerment of women and girls and that they supported a number of projects aimed at reducing poverty and increasing gender equality by supporting the role of women as economic actors.

“I therefore want to recognise one of the important roles that our traditional leaders play in girls education and all the work you are doing to combat harmful practices such as child labour and forced marriages,” she praised the Chiefs.

These, she said were critical issues that must be addressed not hinder the progress of women and girls.”We also believe that growth and development can only take place when there is peace and security and so we recognise the role played by the House of Chiefs through the Committee of Eminent Chiefs under the leadership of the Asantehene in restoring peace in Dagbon,” she observed.

Ogyeahoho Yaw Gyebi, President of the House of Chiefs commended the Ambassador and her team for the visit, which he described as a step towards reinforcing the relationship that traditional leaders had had with the Canadian Government through a number of projects in their jurisdictions funded by Canada.

He said the bilateral relations between Ghana and Canada over the years had been of immense benefit for the two countries and assured the Ambassador of the commitment of the House to work closely with the High Commission to address developmental challenges in their communities.