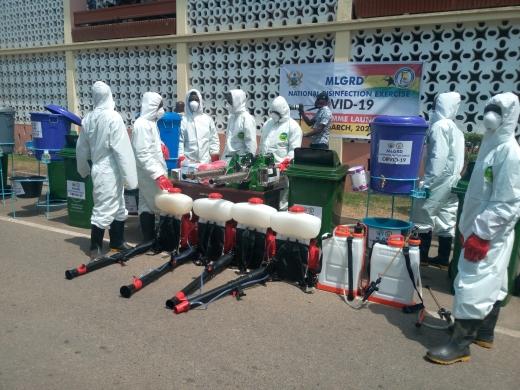 A week-long fumigation exercise in some major communities of the Cape Coast North Constituency is underway as part of measures to abridge the spread of COVID-19 pandemic in the Constituency.

The exercise, which started on Monday March 23 is being undertaken by the office of the Member of Parliament (MP) for Cape Coast North Constituency, Mrs Barbara Asher Ayisi.

The Abura Market and other satellite markets as well as Pedu, Esuekyir, Eyifua and many other communities have so far been fumigated.

Gutters, refuse damps, stagnant waters, public toilets, abandoned buildings and bushy areas were the other target areas for the fumigation being executed by the Environmental Health section of the University of Cape Coast (UCC).

Explaining the rationale behind the exercise, Mr Stephen Kojo Arhin , the Cape Coast North Constituency Chairman of the New Patriotic Party (NPP), said it was to complement Government’s efforts to truncate the spread of the Coronavirus disease.

“Even though the virus has not yet touched any part of the Region, the MP has considered it prudent to disinfect various places in Cape Coast to prevent breeding grounds for the virus,” he added.

He said the fumigation exercise would be followed by extensive public education to broaden the awareness on some preventive measures required to fight the virus as directed by the Ministry of Health (MoH).

Mr Arhin urged all not to politicise issues of national concern, but join forces to support Government efforts for the good of all Ghanaian citizens.

He again expressed appreciation to all who supported and continued to support the initiatives of Government and urged the public to take the pandemic seriously as a public health concern.

Mr Usman Abban Egyir, the Assembly Man for Kakumdo Electoral Area, where the fumigation was done, told the GNA that households and sellers were pre-informed of the exercise to court their cooperation with personnel on grounds.

He said there were enough chemicals to carry out the whole exercise and thanked the MP for the support.