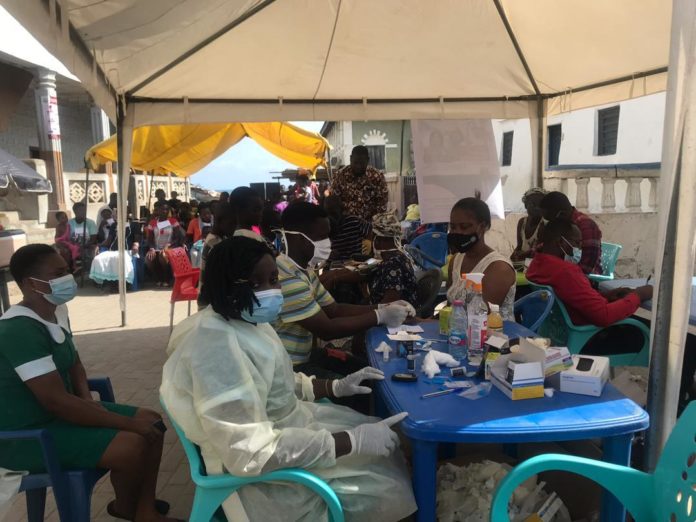 The exercise, which seeks to bring quality healthcare to the doorsteps of people in deprived communities across the country, is expected to benefit more than 6,000 residents from six districts within the Central Region.

The beneficiaries were screened for all forms of diseases including malaria, hypertension, prostate and breast cancers as well as other chronic and Sexually Transmitted Diseases (STDS) among others.

They also received free medical consultation and provision of drugs after diagnosis and were educated on various diseases and their prevention.

Those whose cases were found to be serious were referred to the hospital for further checks and treatment.

Public Health officials from the Cape Coast Teaching Hospital screened and also educated the beneficiaries on good eating habits and the dangers of drug abuse and self-medication.

Other areas were HIV prevention, especially mother-to-child transmission during pregnancy, delivery, and breastfeeding.

Speaking in an interview with the Ghana News Agency (GNA), Ms. Afful, outlined the vision behind the screening, saying it was to improve health care in deprived communities in the Region to help raise their living standards and make life comfortable for all.

”The screening is to provide family life, quality education, and emotional support for children who through no fault of theirs found themselves in difficult situations.” she added.

Mr. Frederick Abban, National Director in charge of Information and Technology (IT) of YEA, touching on successes chalked by the YEA said it had recruited over 1,500 unemployed youth for four years the initiative was introduced by the government on different modules.

He said some of the beneficiaries have been enrolled as Community Policing Assistants ( CPA), Sanitation personnel, School Support, Youth in Graduate Internship, and among others.

The Director of IT said the Central Region would soon become a hub for commercial poultry to curtail the huge importation of poultry products into the Country.

It will consequently, liaise with other Regions to improve productivity as more jobs were created in that sector.

Mr Abban indicated that the YEA was not only focused on employing people but also ensuring their wellbeing to enable them to work wholeheartedly without distractions from health issues.

He urged the residents to safeguard their health at all times.