The African Commission of Health and Human Rights Promoters (CAPSDH) on Wednesday condemned recent xenophobic attack in South Africa and called on the African Union Commission to immediately intervene. 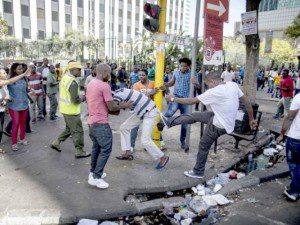 “We are greatly saddened by the insurrection of unprovoked attacks on nationals of other countries in South Africa.

“We particularly lament that the xenophobic tendencies are unleashed on citizens of Sub- Saharan countries living in South Africa. CASPDH condemns these uncivil attacks in uncertain terms,” a statement signed and copied to the Ghana News Agency in Accra by Professor Edmund N Delle, CASPDH President stated.

“We however challenge the government to call for international assistance that will help curb this heinous crime.

“We further call on the AU and other Regional Blocks to act swiftly to avoid further degeneration of this unfortunate development,” the statement said.

The statement said civil society groups and human rights advocates across the continent were all concerned about the growing drug menace, illegal migration and joblessness across Africa.

However it is uncivil for the xenophobes to register their displeasure in the form of killing and maiming fellow Africans.

“We commend the Ghana High Commission in South Africa for putting on their web site a xenophobic hotline for distressed Ghanaians to contact. We also commend the president of South Africa and the Nelson Mandela Foundation for out rightly denouncing xenophobia.

CAPSDH therefore urges fellow Africans to stay calm in this difficult time and avoid reprisal attacks on South Africans or boycotting their products.