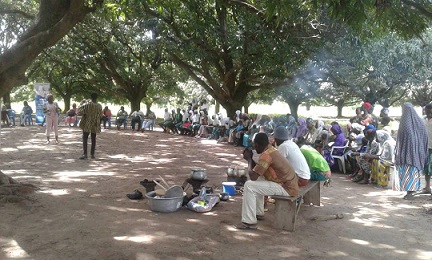 The Community Aid for Rural Development (CARD) Ghana, a Non-governmental Organisation (NGO), has held a demonstration exercise on gender norms and stereotypes at the Chegli, a community in the Wa Municipality.

The demonstration exercise saw the young boys and girls compete in activities predominantly ascribed to the males or females gender by society.

These activities, which included cooking of different local dishes, laundry and tug of war, formed part of the implementation of the five-year “She Leads” project, in partnership with Plan International Ghana.

The children also debated on whether or not women and girls should be included in the decision-making process at all levels of community development discourse.

During the debate, the boys argued that girls did not have confidence in themselves, which makes them shun calls to lead, did not support one another and did not take any initiative to participate in the decision making process.
The girls, on the other hand, also contended that there was the need for women and girls to be included in the decision-making process as they could also contribute meaningfully to the development discourse.

They also intimated that it was unacceptable for men to make decisions that affected women without involving them.

“Women give birth to men, nurture them to grow into responsible people, and then consider women as inferior and neglected when making decisions,” the girls explained.

Madam Leenat Abdul Rahaman, the Executive Director of CARD Ghana, speaking at the event, stressed the need for at least 40 per cent of women participation in decision making at all levels.

She said the involvement of only women leaders in the decision process was not representative enough and that they could not fully represent the interest of the affected women.

Madam Benedicta Dawson-Amoah, the She Leads project Coordinator at Plan International Ghana, noted that activities such as cooking, laundering, and fetching water for the family should not be the preserve of only women or girls.
“We want to change the narrative around gender norms for either the boys or the girls and equally promote the idea that young women should be part of decision making, they should be part of leadership in the community,” she explained.

She added that the tug of the war signified that women also could do the paid works that were considered masculines, such as building and construction works and farming.

She also encouraged them to take up the responsibility of leadership at the community and national level, saying “The world is changing and we need to also be changing our stance.”

Pognaa Mumuni urged the men to support their wives at home to undertake their house chores such as cooking and laundering.