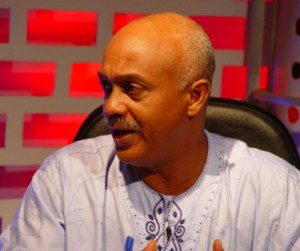 According to him, the mobile networks reach out to every part of the country and could help him in that regard. Mr. Hayford’s rather sarcastic suggestion, follows President Mahama’s recent assertion to the effect that he could not as a President move around the country to put money in people’s pockets, and that people ought to create wealth for themselves by taking advantage of the economy.

“The thing is that; if you say feeling it in your pocket it doesn’t mean the President will come from place to place and count money and give to everybody to put in his pocket. The economy will provide the opportunities but it is for the people to take advantage of it.

You can’t be sitting with his hands crossed and saying that if the economy is growing why I am not feeling it. You need to take advantage of the opportunities that the economy is creating and that is how money comes into your pocket,” he added. The President’s latest assertion, however contradicted the one he made in February where he promised that Ghanaians would have money in their pockets after he is given a second term in the November elections.

Speaking on Citi FM’s news analysis and current affairs programme ‘The Big Issue’ on Saturday, the plain-speaking Sydney Casely Hayford said, “I was thinking he [ President Mahama] doesn’t have to go throughout all the country doing that, if he really intends to put money in people’s pockets, we can take mobile money. So we can do it from a central point; from Vodafone Cash, Tigo Cash, Glo Cash, MTN mobile money and all that,” he added. Mr. Casely-Hayford said the President’s comment was inappropriate, adding that he could have communicated in a much better way.

“If he wanted to say that I will create the environment so you can create wealth through the good infrastructure and the good issues in the economy so you will be worth more in 2017, I’m sure that president Mahama could have said that, if that was really what he had intended. So I have to assume that he either intended it but didn’t take his time to say it properly or what he intended was to persuade the voting public that he will put money directly into your pocket. He has said categorically that he cannot go through the whole country physically paying cash out to everybody. I find that denigrating,” he added.