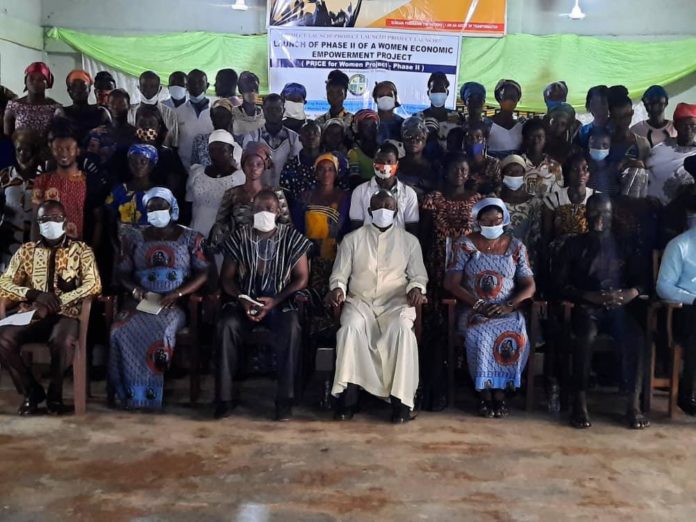 About 1000 Women living along the Eastern Corridor enclave in the Kpandai District of the Northern Region are to be enrolled onto a platform meant to improve their entrepreneurial capacities.

The Promoting Resilience for Improved Income through Capacity Enhancement for Women (PRICE) project is also to ensure that they have improved access to economic empowerment opportunities and reduce gender inequalities in traditional communities.

The programme is targeting 1,000 women directly and about 28,000 indirect beneficiaries and is expected to increased rights, urgency, and capacity for decision-making.

This is the second phase of the PRICE project, which also seeks to improve access to rural financial services for 1,468 rural women in the Eastern Corridor of the country and enroll them into Village Savings and Loans Associations (VSLA) groups where at least 800 of them would access loans and savings services from the VSLA.

It will also work to promote gender-sensitive practices towards reduced inequalities.

The PRICE project, which runs until May 2023, is an initiative of the Catholic Archdiocese of Tamale and sponsored by Misereor, an organisation based in Germany.

Very Reverend Matthew Yitiereh, Vicar General of the Catholic Archdiocese of Tamale, who launched the PRICE project on behalf of the Metropolitan Archbishop of Tamale, at Kpandai, said it was in line with the Church’s human development efforts to make lives better.

Access to financial services is very low among women along the Eastern Corridor of the country and they are unable to raise the needed collateral to enable them access loans from the formal financial institutions.

Their capacity in enterprise development also is very low.

There is also inequality between men and women in the area and domestic violence was predominant in homes and communities where women are not economically empowered.

Through the PRICE project, therefore, about 15,000 community members will be sensitised on gender equity promotion and at least two men volunteers will serve as gender models and advocates in each community to amongst others reduce gender-based violence by 70 percent in project communities.

The first phase of the PRICE project, which was implemented in the area from 2018 to 2020, ensured improved access to economic empowerment opportunities for some 250 vulnerable women and promotion of gender-sensitive practices in 10 communities targeting about 1,000 people in the broader context of the Sustainable Development Goals.

Very Reverend Yitiereh expressed confidence that through the project, women along the Eastern Corridor enclave would be empowered to better manage their resources for the benefit of all.

He expressed gratitude to Misereor for funding the project, saying the funds would be judiciously applied to ensure that they ultimately developed the beneficiaries and the Church.

Reverend Father Sebastian Zaato, Manager of the PRICE project said the project amongst others would improve financial literacy among the beneficiaries, increase their capacities to undertake sustainable entrepreneurial ventures, and further bridge the inequality gap between men and women in traditional communities.

Rev Zaato added that the project was anchored on the transformative principle of the SDGs, which stipulated that all development efforts must ensure that “No one is left behind.”

Mr Emmanuel Tatablata, District Chief Executive for Kpandai, who was represented during the launch, commended the Catholic Archdiocese of Tamale for initiating the project in the area to better the lives of women.

Mr Tatablata said he was convinced that the Assembly would create the enabling environment to ensure the success of the project, which would empower the people for self-development in line with the government’s Ghana Beyond Aid agenda.

Some of the beneficiaries of the first phase of the PRICE project praised it for helping them to identify opportunities and understand business management where they were generating enough income to take care of their families.

Madam Esther Nsiadong, one of the beneficiaries of the first phase of the project, was optimistic that the second phase would further sustain their gains and put them on the path of economic freedom.