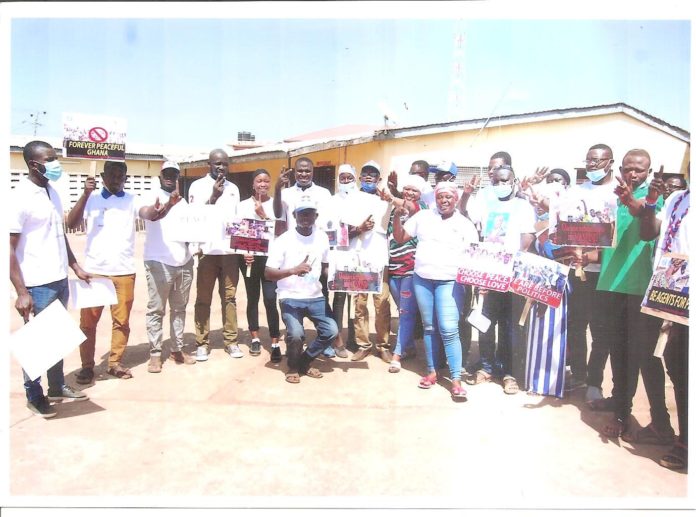 Sharing Education and Learning for Life Service (SELL), Catholic Relief Service (CRS) in collaboration with Catholic Diocese of Yendi have organized a peace walk for the youth and political parties in Yendi.

It was also attended by Women in Peace Building, Justice and Peace Commission, Traditional council members, Electoral Commission, Youth Parliament SEND Ghana, Religious bodies amongst others who walked through some principal streets of Yendi.

They carried placards, some of which read; we do not need guns, machetes or bombs, we need love, compassion and tolerance, blessed are peace makers, peace for present and future generation with Catholic Youth Organization (CYO) Band providing brass band music for the walk.

Bishop Vincent Sowah Boi-Nai, Catholic Bishop of Yendi Diocese appealed to participants to pray and practicalise the peace messages they had receive overtime.

He said although Yendi in the past was synonymous to conflicts, efforts by government and other stakeholders had brought in peace and urged all to sustain it by avoiding harsh language during their electioneering.

Bishop Bai-Nai who is also the Patron of the Yendi Peace Centre advised the political parties to ensure that the right things were done to avoid grumblings.

Madam Carolyn Edlebeck Head of Programming of CRS, Tamale gave the assurance that Ghana would have a peaceful 2020 election in December and urged all to denounce violence.

Mr Vincent Agyei Executive Team leader of SELL Programme Ghana said CRS had been supporting them to carryout education on peaceful election in the country and one of the key issues was for them to organize peace walks to demonstrate peace to the public that they should all get involved for a peaceful election.

Mr. David Puayidi Project Manager of CRS, Accra said apart from the peace walk in Yendi, similar programmes would be organized in Bunkprugu in the North East region, Wa in the Upper West and Tamale with radio programmes before December 7, 2020.

He said CRS would continue to support the organisers financially before during and after the elections to ensure that Ghana maintained the peace they were enjoying.

Mr Shahadu said the Electoral Commission Officials would be at the polling station at 0630 hours prompt to ensure that everything for the polls was put in order.

He called on the political parties to educate their electorate to adhere to the COVID-19 protocols by wearing their nose-masks, Social distancing, and wash their hands at the polling stations before they cast their ballots.

He urged them to also consider the physically challenged, old age amongst others and educate their electorate to devote their time to go to the polling stations early to avoid last minute rush to vote.

He advised the Political Polling Agents at the polling stations to be vigilant and not to allow or temper with any voting material.