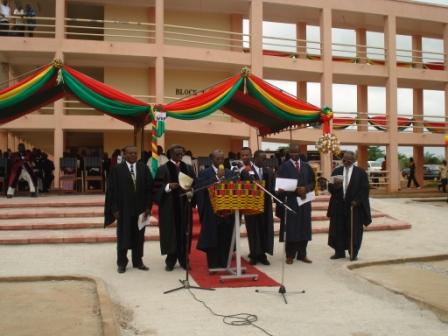 The Catholic University College of Ghana (CUCG) has produced 4,135 cumulative number of graduates since its inception in 2003. Professor James Hawkins Ephraim, Fellow, Ghana Academy of Arts and Sciences (FGA) and Vice-Chancellor (VC), announced at the 11th Congregation and 20th Matriculation ceremony of the University on Saturday at Fiapre in the Sunyani West District of Brong-Ahafo Region.

Prof. Ephraim said 1,454 students graduated this year, making it the largest number of graduates at a single congregation in the annals of the school, whilst 313 fresh students admitted during the institution?s January 2015 admissions were also matriculated, he added.

The CUCG began 12 years ago with 50 students but its current number of student population is 3,908, offering courses at both under-graduate and post-graduate levels in Economics and Business Administration, Information Communication Sciences and Technology, Public Health and Allied Sciences, Religious Studies and Education, the VC said.

The VC advised the matriculants to develop a heart of excellence and dress decently with discipline as their watchwords so as to be serious with their academic works, stressing that they must use their times judiciously while making moderation to underpin their individual activities.

Prof. Ephraim stressed the need for the fresh students to avoid social vices and ensure to live upright lives as a foundation for a successful end of their academic journeys at the University.

?I seriously entreat you to learn to listen with ?the ears of your heart?, you need to take pictures of yourselves and with your families now and occasionally look at the picture and promise never to defy the purity and beauty that is in you,? he emphasised.

The VC advised the graduates to be focused and consistent in their respective endeavours in order to impact positively on their families and contemporaries, the nation and the larger global community.

In an address read for him Prof. Ernest Aryeetey, VC of the University of Ghana (UG) said ?the University has a strong Quality Assurance Unit which ensures that the required academic standards are maintained?.

He therefore encouraged the UG?s affiliate institutions to do same and promised the continuous assistance of the UG to those affiliated institutions including CUCG to build capacity in that respect.

Prof. Dominic D. Kupoole the VC of the University of Cape Coast (UCC) in a speech delivered for him said the UCC?s collaboration with the CUCG since 2006 had produced 263 students in the field of Education.

Reverend Monsignor Dr. John Opoku Agyemang, the Rector of Saint Gregory Major Seminary at Paakoso in the Catholic Archdiocese of Kumasi and a member of the Governing Council of CUCG who acted for Most Rev. Philip Naameh, Catholic Archbishop of Tamale and substantive Chair of the Council also addressed the function.