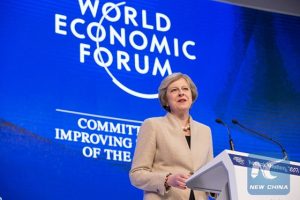 The week started with a fanfare as President Xi Jinping, the first Chinese head of state to address the forum, gave a speech that promoted open and free trade and warned against protectionism, while setting out China’s plan to make its 6.7 percent growth rate sustainable.

The message was well-received, with business leaders here praising Xi’s display of openness and commenting throughout the week that China has showed its willingness to lead global free trade, even as it continues to institute industrial reforms and develop more international partnerships.

British Prime Minister Theresa May, another marquee speaker at the Davos forum, made a special address on Thursday, just two days after revealing her government’s vision for a more global Britain after the conclusion of Brexit negotiations.

While pledging to remain a “friend, neighbor and partner” to the European Union (EU), May presented Britain as a fresh advocate for free markets, free trade and globalization.

Whether or not the British PM’s attempts to take the edge off a “hard Brexit” plan will succeed, her position was cautiously welcomed by her European partners.

European Council President Donald Tusk reacted positively to May’s speech and said the EU was ready to work with Britain. On Friday, German Finance Minister Wolfgang Schauble, known for his tough stance on Brexit, said that he and his colleagues would work relentlessly to reach an agreement that would limit damage to both Britain and the EU.

Perhaps the best indication of optimism at Davos, however, came from bank chiefs and analysts. The general consensus was that growth was positive everywhere in the world, and that even sluggish regions, like Europe, were in recovery.

Brian T. Moynihan, chairman of the board and chief executive officer at Bank of America Corporation, said that “business confidence is reviving and the U.S. economy will grow 2 percent this year.”

For her part, Christine Lagarde, managing director of the International Monetary Fund (IMF), said that “we are seeing for the first time numbers that are not being revised down by the IMF.”

Meanwhile, observers and commentators have been looking eagerly to the United States and the Trump administration, to try to anticipate what policy shifts in America could do for the world’s economic outlook. Many hope that the turn to fiscal policy over monetary policy will see a bump in growth, as well as a reduction in regulatory activity.

“The focus on regulations has perhaps been at the expense of growth,” said Mary Callahan Erdoes, chief executive officer of asset management at JPMorgan Chase & Co.

With significantly more members of Donald Trump’s cabinet having strong business experience than ever before, the prudent optimism at this year’s Davos forum may have reason to grow. Enditem