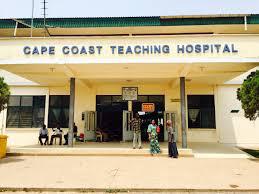 The Cape Coast Teaching Hospital (CCTH) has been adjudged the best healthcare provider in the Cape Coast Metropolis at the maiden Osabarimba Royal Awards, held amidst glitz and glamour.

It sought to reward and appreciate individuals, groups and organizations who had contributed their bit to the growth and development of the Cape Coast Traditional Area.

The CCTH has since its establishment some 23 years ago as a referral hospital and recently as a Teaching Hospital, provided quality public healthcare services to the general citizenry in the Region, the Country and some patients from the Sub-Region.

It has been a centre of learning for several medical students and nurses’ training colleges.

Receiving the award, Dr Eric Kofi Ngyedu, Chief Executive Officer (CEO) dedicated the award to the board, management and the entire working staff of the hospital for their sacrifices, commitment and dedication to duty.

Equally, he was grateful to all stakeholders for their immeasurable support, donations and encouragements culminating in quality healthcare services and reassured that the health facility would continue to do its best to meet the health needs of all.

Other organizations like the MTN Ghana, ABSA Bank, and the plush Ridge Royal Hotel were also recognised and awarded for their enormous support and handwork exhibited to positively impact the progress of Oguaa.