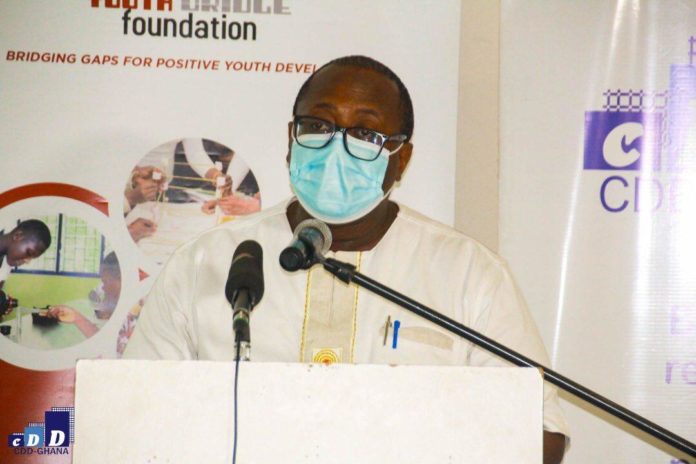 The Ghana Centre for Democratic Development (CDD-Ghana), has underscored the need for the youth to have more opportunities to engage in governance processes beyond the exercise of their franchise.

Dr Kojo Asante, Director of Advocacy and Policy Engagement at CDD-Ghana, said Ghana had a youthful population with about 57 per cent of its population under 25 years.

He reiterated that this youthful population could be an asset for the nation if the enormous abilities, intellect of the youth were channeled towards national development.

Dr Asante made these remarks in Accra at the “Youth Speaks Forum”, on the theme: “Engendering National and Local Conversations on Youth Issues Ahead of Elections 2020”.

It was organised by CDD-Ghana and Youth Bridge Foundation (YBF) in collaboration with the United States Agency for International Development (USAID).

It aimed at bringing both political actors and youth groups together to have dialogue towards enhancing youth participation in political and governance processes to promote national development.

Dr Asante said the limited political participation for the youth was an Africa-wide problem as evidenced in the research findings from the Afrobarometer.

He said the Afrobarometer findings suggested that political participation of young people in Africa had declined over the past decade and a half.

He noted that sadly, the youth participation in the political processes had occasionally been negative, adding, “Political actors sometimes mobilize the youth to cause mayhem and violence during elections.

Dr Asante said CDD-Ghana’s work on curbing the menace of political party vigilantism in 2017 and 2018, supported by USAID, revealed that most of the party affiliated vigilante groups were made up of people in their young and active years.

Madam Ivy Antwi, Communications Officer at YBF, said a crucial question to be answered to exhaustively address youth challenge, was how Ghana like many African countries could tap the latent potential of youth power presented.

She said the youth was a transient state which played a vital role in shaping the fortunes of nations and therefore any nation that paid lip service to youth development would suffer dire consequences, hence, the need for stakeholders to consider youth development issues.

Mr Amos Blessing Amorse, National Democratic Congress (NDC) Greater Accra Deputy Regional Youth Organiser, said the NDC sees the youth as partners in shaping the country, and so there was a need to categorize the youth to help in effective policy formulation and implementation.

Mr Farudeen Yakubu, People’s National Convention (PNC) the Greater Accra Regional Communications Director, said a PNC administration would review the curricula of education from the basic level and would not only provide free compulsory education but also quality education.

Mr Afelik Agoba, Convention’s People Party (CPP) Greater Accra Regional Deputy Youth Organiser, noted that the focus had always been on formal education, but a lot of the youth were not in the formal sector, had not gone through formal education, hence CPP would make informal education more organised and comprehensive.

Mr Mandela Edward Wiafe, New Patriotic Party (NPP) Greater Accra Regional Youth Wing Secretary, said the NPP was focused on job creation and there were a number of initiatives which aimed at enhancing the skills of the youth.