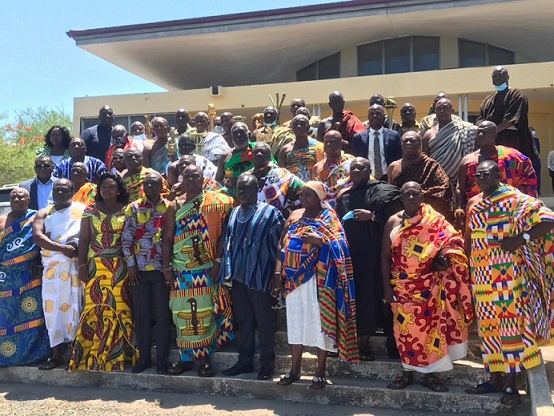 The Central Regional House of Chief has pledged its unwavering support to the government in developing the Region.

The move is to stop the bad tag of the Region as the poorest to bring more developmental projects and opportunities to reduce the unemployment rate.

At the 2021 first General Meeting of the House of Chiefs in Cape Coast to deliberate on issues confronting the Region to devise ways of resolving them, the Chiefs were unhappy that the Region which had the best schools, hospitals and was the hub of tourism had remained the fourth poorest in the country.

They said they were availing themselves to work closely with relevant stakeholders in developing it to attract more investment, projects, and opportunities to better the standard of living in the Area.

They will also support promoting peace, ensure safety and growth for it to be counted amongst the richest in the country.

Odeefo Amoakwa Buadu VIII, the President of the House delivering a speech at the meeting disclosed that there was the need for them to relook their roles and be more development-oriented to make the Region more attractive.

He said they were available for stakeholders’ engagements in improving lives and reducing the rate of social vices among the youth as a result of unemployment.

Odeefo Buadu VIII appealed to the government to help push the development agenda of the Region through tourism development to boost the economy and also generate funds for the country.

Mr Ebenezer Kojo Kum, the Minister for Chieftaincy and Religious Affairs, called for unity of purpose to fight galamsey to protect water bodies and forest reserves.

He called on the chiefs to support the fight as they played a critical role in governance in the country to enhance development.

Mrs Justina Marigold Assan, the Regional Minister on her part, called on all stakeholders to collaborate in making the Region the greatest amongst all Regions of the country.