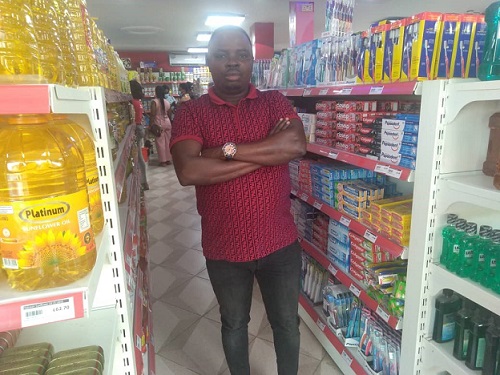 He said prices of imported items particularly food were high as compared to local foods adding that shops could not stock only local goods since it must reach an international level to meet the needs of both local and foreigners in an area.

Mr. Tetteh was speaking in interview with the Ghana News Agency (GNA) in Sunyani during the opening of a shopping mart.

The shopping mart first of its kind in the centre of the Sunyani Municipality is located in the old Barclays bank building stocked with products such as electronics, alcoholic and non-alcoholic drinks, toiletries, cosmetics, spices, all types of canned and packed food products, furniture, kitchen wares and mother care products.

He stated that the opening of the shop in Sunyani was purposely to create employment opportunities for the youth particularly women, who were vulnerable in society.

Mr Tetteh said the Mart would bring some items closer to the people in Sunyani to save them from travelling far to Kumasi and Accra, saying all the products in the shop were of high quality at affordable prices for all.

He said all the workers were offered good customer care training skills to accept all customers in the shop and treat them with respect and urged buyers to help sustain and expand by shopping there regularly.

Mr. Tetteh announced that plans were advanced to open rubber and tomato factories in the Region to employ 150 people to help solve the unemployment situation in the Region.

The specific places for the establishment of the factories were not yet known, he said, saying negotiations with chiefs in the proposed communities in the Region for land was in the process.
He said priority would be given to women because they were good managers.