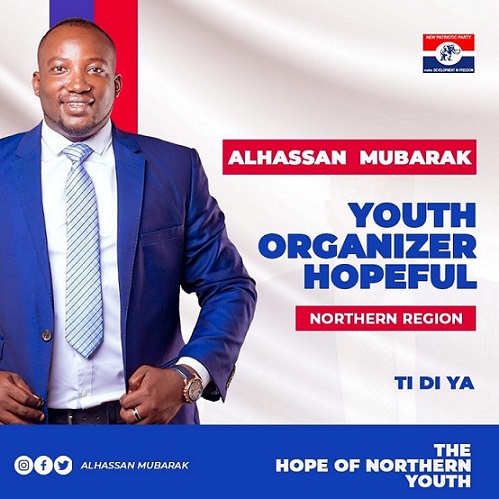 Posters Mr Mubarak went rife on social media giving an indication of his intention to contest the position when the party opens nominations.

He presents himself as “Hope For The Northern Youth” with an ambition of mobilizing and re-energizing of the NPP youth in the region.

The NPP is expected to begin the process of electing new Constituency, Regional and National Executives to steer its affairs for the next four (4) years later this year.

Mr Mubarak who is an entrepreneur is also the CEO of BigTyme Entertainment, an event and artist management company.

He formed the Concern NPP Youth Group in the Northern Region which has championed a wide range of activities for the party in the region.

Mr Mubarak has also supported and campaigned for the ruling NPP in both 2016 and 2020 general elections.

However, Alhassan Mubarak is expected to slug it out with incumbent Youth Organizer, Alhassan Ghana and son of late former Northern Regional Chairman Alhaji Abdul-Mumin COP.

Water shortage in the northern region is alarming