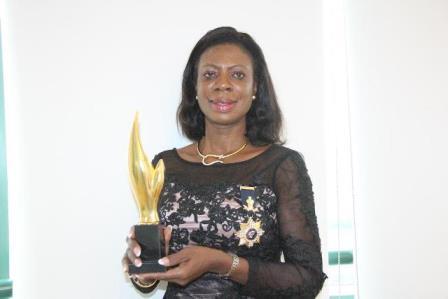 The awards organised by the Ghana Energy Awards Committee, was to recognise individuals and corporate bodies in 20 categories, which is endorsed by the World Energy Council, Ghana, Ministry of Energy and its agencies.

It is aimed at recognising the achievements, success, efforts, innovation and excellence of corporate entities as well as individuals in the energy sector.

Mr John Peter Amewu, the Minister of Lands and Natural Resources commended the award winners for their contributions in building a viable energy sector in the country.

He said renewable energy was needed to pay attention to and that government had showed commitment towards its feasibility and its policy towards renewable was not encouraging and called on all stakeholders to work towards migrating into renewable to be competitive in the market.

Mrs Quartey-Papafio was in April awarded by the Ghana Entrepreneurs Foundation, and inducted into entrepreneur hall of fame, for her outstanding and innovative performance and is the first female cable manufacturer in the ECOWAS sub region.

Her company manufactures quality electrical and telecom cables and conductors and has grown tremendously over the years, employing over 100 workers, produces for local and international markets, and contributes significantly to the growth and development of the country.