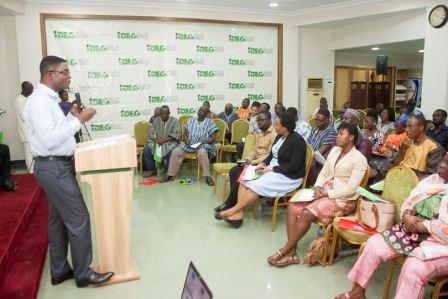 The Institute for Democratic Governance (IDEG) on Wednesday held a national forum on the successes and challenges of the decentralisation process in Ghana.

The forum, which attracted participation from the Metropolitan, Municipal and District Assemblies (MMDAs), Ministry of Local Government and Rural Development, Ministry of Finance, academia, Civil Society Organisations and the media would discuss the rational for district level resource mobilisation.

It would also share grass root experiences on revenue mobilisation with stakeholders, raise advocacy messages from the action with key national level stakeholders of decentralisation and build consensus on solutions to challenges of Ghana?s decentralised system.

It was expected to improve collaboration of Community-Based Organisation and citizens with district assemblies on revenue mobilisation to enable them to build consensus on strategies for improving decentralisation in Ghana and collaborate also with project partners with different stakeholders to deepen the entire process.

According to him there were so many gaps and issues such as the misconception of the District Assembly Common Fund and its disbursement, revenue mobilisation, accountability and transparency among other things.

There also exist a consistent finance gap to local government because their function has not been properly costed, therefore the equation was always unbalanced which has accounted for the low level of development at the local communities.

Mr Osae said although the overall aim of the decentralisation process was to devolve political, administrative and financial authority from the centre to the local Assemblies, its envisaged ends had been partly achieved.

He said the decentralisation process has partly failed to provide institutionalised forums for interaction for users to influence the state, particularly in more complex areas such as employment generation and taxation.

The result of these is the apathy among citizens, lack of participation in important local governance issues and inadequate resource mobilisation to finance development projects for better public service delivery due to the negative attitudes towards taxation and respect of bye-Laws of local assemblies.

The people often accuse the local assemblies of lack of transparency, accountability and the lack of involvement of the local people in important local projects leading to lack of local ownership.

Mr Osae said effective decentralisation would require the people to elect their own district chief executives (DCEs) who would be answerable to them instead of the central government, to ensure development in these areas.

He said a successful decentralisation process would thrive on the strengthening of the local assemblies to be able to operate independently without any interferences from the central government.

Dr Emmanuel Akwetey, Executive Director of IDEG, said the orgainsation, together with its partners, had implemented the Action for Local Employment Accountability and Resource Mobilisation (LEARN) project under an EU grant to support citizens in 18 district and municipal assemblies.

The GIFNet project engaged effectively with the district assemblies through informal and formal channels such as budget hearing, fee-fixing meetings, development planning processes and IDEG?s annual district and community dialogues, to identify advocacy strategies especially on revenue mobilisation and unemployment.